The right side of the card has been creased and the lower right corner is missing, indicating that the card may have been intentionally bent as a part of the unrecorded short-hand of early calling card etiquette.

The Only Printed Example of Mrs. Washington's Calling Cards

Remarkably, this card—the only printed example of Mrs. Washington’s cards known to survive—corresponds exactly to a copper printing plate which descended in the Custis family and is now in Mount Vernon’s collection.

Martha Stewart Wilson (1758–1852) received the card in 1796, as described in a brief note which recalled the memorable visit:

A Legacy of Friendship

By the 1790s, Mrs. Wilson made regular visits to the national capital, in part to introduce her only daughter, Margaretta Wilson, to the leading members of society.

The mother later proudly remembered how Mrs. Washington had shown “very marked attentions” to her daughter through visits and invitations to private parties.

She was first first lady of the United States and spent about half of the Revolutionary War at the front with General Washington. 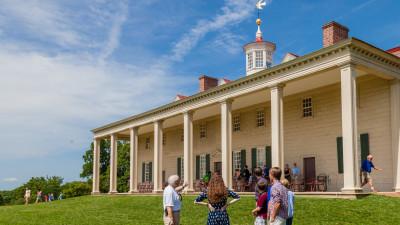 This article was originally published in Mount Vernon Magazine, a membership benefit.

Membership helps restore and maintain George Washington's estate so that more than a million people can experience it each year.