Martha Dandridge was the daughter of John Dandridge and Frances Jones, she grew up in a two-story house called Chestnut Grove, about thirty-five miles from the colonial capital at Williamsburg.

Founded in 1607, the Virginia colony had at first struggled to survive. Disease, starvation, high mortality, and a series of internal conflicts almost doomed the settlement to extinction.

The successful introduction of a marketable form of tobacco, however, provided Virginia with a staple crop that fueled the colony’s growth, prosperity, and expansion after 1620. To satisfy an ever-growing demand for tobacco in England, Virginians pushed aside native Indian inhabitants and settled along the colony’s many deep rivers and streams.

Yet land alone was not sufficient to generate riches. What Virginians needed most was labor. For the first three-quarters of the seventeenth century, white indentured servants comprised the bulk of the labor force. After Bacon’s Rebellion in 1676, however, landowners increasingly turned to a different labor force, enslaved people from Africa. By 1700, about forty percent of the colony’s population consisted of black enslaved individuals. Along with land, enslaved people became the basis of prosperity for Virginia planters and a sign of wealth and status. 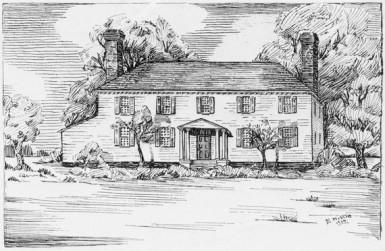 Martha’s parents married in 1730, when Frances Jones was twenty years old and John Dandridge was thirty years old. At the time of his marriage, John Dandridge was a moderately successful planter, possessing 500 acres along the Pamunkey River in New Kent County. In time, he came to own between fifteen and twenty enslaved workers.

John Dandridge built a comfortable, two-story house called Chestnut Grove on his plantation, about thirty-five miles from the colonial capital at Williamsburg. He eventually assumed sought-after positions such as clerk of the New Kent County court, colonel in the local militia, and vestryman in his parish church.

On June 2, 1731, the Dandridges had their first child, Martha. Seven brothers and sisters followed. Although relatively well-off, the Dandridge family belonged to the minor local gentry. Unlike the Carter or Byrd families, who owned thousands of acres of land and hundreds of enslaved people, they were not members of the highest levels of Virginia society. Martha’s father was neither elected to the Virginia House of Burgesses nor received an appointment to the Governor’s Council, the highest governing body in the land.

Nonetheless, John Dandridge was known and respected. As a result, Martha could expect to make a good marriage to a man of her own social class. But when Martha came of age she was courted by someone at the pinnacle of Virginia planter society: in fact, by the heir of one of the grandest fortunes in colonial Virginia.

Martha Dandridge was married in 1750