In August 1835, circus magnate P.T. Barnum paid promoter R.W. Lindsay $1,000 for the rights to the story of Joice Heth. Heth, an elderly African American woman, with an interesting claim to a piece of George Washington history. According to the story, Heth had been the nurse to the infant George Washington. 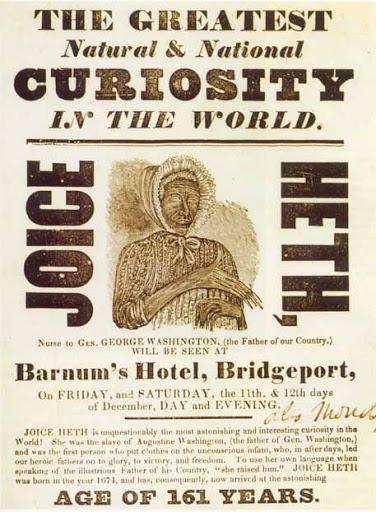 The story, Lindsay explained to Barnum, was that Heth was an enslaved woman owned by Augustine Washington (George Washington’s father) who was sold in 1727, at the age of 54, to his sister-in-law, Elizabeth Atwood. Upon the birth of George Washington in 1732, Heth returned to the Washington family to serve as a nurse for the infant.

With this story at his disposal, P.T. Barnum paraded the blind and nearly paralyzed Joice Heth across New England from August 1835 to February 1836 advertising her as a 161-year-old woman who was “the Greatest Natural and National Curiosity in the World.” Following her debut at Niblo’s Garden in New York City, huge crowds continued to touch the hands that held baby George Washington. Adding to her story, Heth was known to recount stories of the first president as a young boy.

After seven months on Barnum’s exhibition circuit, Joice Heth died in February 1836. She had grown weak from the grueling schedule of being on display, however, this was not the end of Barnum’s exploitation of Joice Heth. A public autopsy was organized, with Dr. David Rogers, to determine Heth’s true age. Fifteen hundred viewers were charged $0.50 each to watch the doctor dissect the woman. Upon completion of the autopsy, Dr. Rogers declared Joice Heth to be between 75-80 years old and Barnum declared he had been bamboozled into believing her story.

Research Historian May V. Thompson commented on understanding the absurdity of this story,

“Joice Heth came on the scene just three years after the 100th anniversary of George Washington’s birth and nine years after the deaths of Thomas Jefferson and John Adams. Americans were feeling the Revolutionary War generation slipping away, at a time when sectional differences leading up to the Civil War, were escalating. They were desperate to hold on to that earlier, ‘purer’ time, and thus were willing to suspend rational thought to believe that an elderly African American woman could actually be over 150 years old and the former nursemaid of an infant George Washington.”