Mount Vernon recently had the opportunity to sit down with Phil Levy, author of Where the Cherry Tree Grew: The Story of Ferry Farm, George Washington’s Boyhood Home. Learn more about Washington’s early days in Fredericksburg, Virginia and about some of the myths that originated from this period. 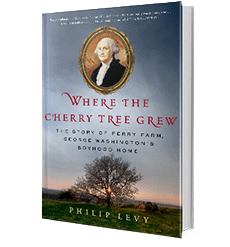 Who was Mason Locke Weems?

Mason Locke Weems was a Maryland-born preacher, bookseller, itinerate,--colorful character, fiddle player of some renown-- who was by some accounts the last Anglican ordained minister in the United States. His story is really rather problematic as biographers kind of dance around the fact that he manages to avoid the revolution entirely. He’s becoming the great American writer in the early republic yet somehow he’s gone during the Revolutionary War period and he turns up immediately after the war in England to become an Anglican minister and then had to return. So he begins as a writer that has this credential that is a little bit uncertain and he writes fairly conventional religious tracts—moralizing tracts against drinking and gambling and other things. Some of them are just his own versions of existing tracts, but writing in this sort of moralizing way.

Then in 1799 when Washington died, he wrote to his book selling partner in Philadelphia, Matthew Cary, and said rather famously, “Washington’s gone and millions are yearning to know more about him—primed and cocked to learn more, and he’s primed and cocked to tell them.” So he composed a fairly small biography of Washington, and he had been working on it before because he had Washington’s blessing. He’s a local guy. He had moved at some point from Maryland up to Dumfries [Virginia], where there’s still a house that bears his name, and had sort of insinuated himself in one way and made a big deal about the fact that he had visited Mount Vernon. Now if you know your Mount Vernon history, you know that having visited Mount Vernon in 1780s and 90s is not exactly the most selective invitation, a lot of people walked in and out of Mount Vernon, but he makes a very big deal out of this, and he clearly had some contact with Washington somewhere. He claims to have been his personal rector—he’s the rector of Pohick Church, which he isn’t. He called himself the rector of “Mount Vernon parish” to really insinuate it. So he’s sort of a great self-promoter in an early national way and he wrote this biography in a fairly short pamphlet form and gradually expanded it so that between 1800 when the first edition came out, I think its 1800 or 1801, and in 1809 when the final, complete masterpiece is at its maximum size, he produced edition after edition and with each new edition he added some new little detail. 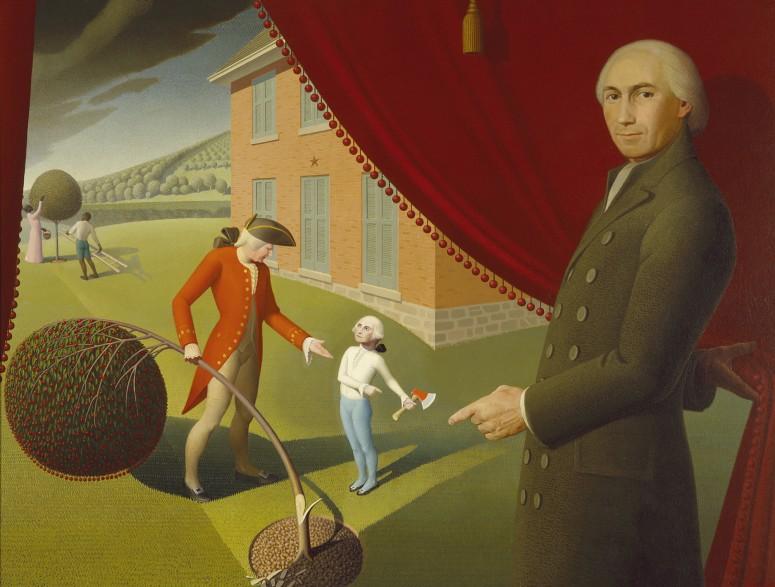 I think it’s the edition in 1806 when he adds the most famous bit which is this cherry tree story—no mention of it before, but then it suddenly appears. There are other stories in there that I’m interested in because they tell interesting things about landscape, but are largely forgotten. Stories about Augustine planting George’s name in cabbage seeds so that the young child sees his name growing in the land and is astounded and talks to his father about this wonderful miracle, but it’s an opportunity to talk about how God controls all things. So a lot of them are sort of very typical children’s moralizing. Some of them are stranger, but he effectively, and I think it’s a great achievement, is that he established a project for understanding Washington, the personal Washington, that he wants to do that, and every biographer since has tried to do the same project and he also gives us stories that are still with us.

What kind of world did Washington grow up in, what was his youth like between the age of 6 year old and when he left to make a career?

Part of what makes Washington such an interesting figure is that he was born into one world and died in another. He really did straddle a major epic change in how the world lived, so that the world that we inhabit and the one that we inherit is very different from the one he was born into. The world that he came from was really one that had not changed remarkably for three generation. In many ways the aspirations of the child Washington would have been identical to that of his grandfather. He would have known a world extremely similar in its value system, in its pace, in its aspirations. He was raised to want the same things that they did which was acquisition of land, acquisition of title, acquisition of prominence. They wanted to be great in the Virginia mold, and to be great in the Virginia mold was to own acres, to own people, to have title, to serve on the church vestry, to serve government, to be the center of a commercial network, to be able to provide for your children to set them up so that they could do the same, to live a family life, meaning not the same as we would use that word at all, but rather to build for the family unit, to forward the Washington name to create more greatness for the generations. That idea did not go away because of the revolution, but its entire context shifts so Washington was born into a time of enormous transition although he never would have known that was what it was, but in many ways the 1730s and 1740s that he passed his childhood in were not that different from the 1650s, it was remarkably continuous, yet he became someone who played an instrumental role in shifting from this old empirical model to something radically different from what it had been.

Who were Washington’s parents?

As soon as we start talking about George Washington being the father of the nation, we introduce family into the discussion, and as soon as we introduce family, we start to be curious about not just who he was as a child, because that maybe who we are as children, but who are his parents. If he is our parent, we want to know, if you will, about our national grandparents, and all sorts of questions emerge about Augustine Washington and Mary Washington, and there’s been a very long discussion for historians about who they are and what their value systems are. Unfortunately, there’s just not a lot to go on. What we know about Augustine Washington, we know from a series of letters that he wrote. We know that he’s a very careful business person, he put a lot of time and energy into making sure that documents looked particular ways. You could look at his will, which you can find online in transcript form, and see the great detail that he went to, to make sure that the property would be handled from generation after generation exactly how he wanted. So, we know that there is a precision to his thinking.

Mary on the other hand, lived longer, was very much loved in the town of Fredericksburg, and in many ways loved more than George was. She was a greater figure for the people of Fredericksburg than her son was. But the stories of her shift and change over time –she goes from being understood as this phenomenally pious woman to by the early 20th century becoming someone that people don’t really like, and yet there’s a wonderful mystery that surrounds her in all of this sort of attention. We end up not even knowing where she is buried. She’s buried in a corner of land and later on, there’s sort of a location of her grave, but it’s not even marked at the time of her death or if it is, it’s marked in such a transferrable way that it’s forgotten. So on one hand, she’s elevated as this wonderful person, and on the other hand she’s just an 18th century woman, an ordinary 18th century woman, who wrote letters to her son complaining about her conditions and wanting him to drop his business, which at the time was running the Army during the revolution, to take care of her personal needs, and that got her a certain amount of criticism from historians from here on in, but the people who lived with her loved her and elevated her to great heights, even though they lost her grave, they erected the first American monument to a woman in the United States to commemorate where she was buried.

What is the importance of the Cherry Tree myth?

Very few of us are going to be able to create an enduring piece of art that’s going to out survive us and survive over the centuries, so whatever we want to say about Mason Locke Weems and the cherry tree story, we have to give him that—he created a masterpiece, something that has become a fundamental part of how we as Americans understand our past, our identity, and our central figures. There are few better known presidential anecdotes, I would venture to say it is the single best known 18th-century anecdote translated into dozen of languages known the world over. So that is quite an achievement. It centers on Washington and more specifically it centers on Washington’s childhood. It’s beautifully written, it’s ambiguous, it claims truth, but it even offers proof. Weems doesn’t say in his writing that he telling us, he says he got it from a venerable old woman in the neighborhood who was kin and she was there to know. So he actually cites a source. He plays the historian in telling us the story which has infuriated historians ever since because we cite our sources too, when we would like you to believe that we do that. The evidence that the story is true is equal to the evidence that it is false. There’s nothing implausible about it—it’s a child who bangs on a tree with an axe. Later version have him chop the tree down, but in fact that was not what Weems wrote. Weems wrote that he damaged it, so a six year with a hatchet damaging a tree is perfectly within the realms of possibility on a farm, not at all out of possibility, and then confessing the deed later, also possible. However, it is mantled with this saccharine, overdone way that clearly is moralizing, but people have so long believed that there is a kernel of truth, if you will, in that story, that little plausibility, the possibility that it might be truth, has sustained the utility of that story and given Americans a Washington that they could attach to, that they could say “I can’t understand the entire object of a Republic, but I can understand this, and by understanding I can understand Washington, and by understanding this Washington, I get to be American and participate in the Republic that he helped to create.

Phillip Levy teaches Early American history and Archaeology, Public History, and Historical Theory at the University of South Florida. He is also most recently the author of Where The Cherry Tree Grew: The Story of Ferry Farm, George Washington’s Boyhood Home, a Macmillan book released in 2013. He is a long time Appalachian fiddler, an inveterate long distance hiker, and is active in his local Jewish community.

Mount Vernon hosted an Evening Book Talk by Levy in the Rubenstein Leadership Hall at the Fred W. Smith National Library to discuss his book.