In 2009, Mount Vernon acquired an important 18th century portrait of George Washington as commander in chief of the Continental Army by the distinguished American painter Charles Peale Polk. The funds for purchasing the painting were generously provided by Donald and Nancy de Laski, Adrienne Mars, A. Alfred Taubman, and the Donald W. Reynolds Foundation.

Painted By a Family of Artists

The Peale family of painters, a prolific brood whose careers spanned nearly a century, is among the most lauded in American art. Over the course of George Washington's lifetime and for decades following his death, this extraordinary group of artists created a wealth of likenesses of the Virginia colonel, commander in chief, and first American president.

Indeed, fellow portraitist Gilbert Stuart famously remarked in 1795 that Washington was "being Pealed all around." The esteemed paintings of Washington produced by America's "First Family" of artists constituted the dominant image in their day, shaped the next generation of portraits, and continue to influence our vision of the nation's first president.

Paintings and Drawings in the Museum Collections

Over the last 150 years, the Mount Vernon Ladies' Association has been fortunate to acquire a number of fine examples of the Peales' likenesses of the Washington family.

Our collection includes portrait miniatures of George and Martha Washington, Martha Parke Custis, and John Parke Custis by the patriarch of the family, Charles Willson Peale (1741-1827), as well as a cabinet-sized oil portrait of President Washington by the artist; a miniature likeness of Martha Washington by Charles' brother, James Peale (1749-1831); and an example of his son Rembrandt Peale's (1778-1860) iconic "porthole portrait" of the commander in chief. Conspicuously absent from this impressive roster-- until 2009 --was an image of Washington by Charles Willson Peale's nephew, Charles Peale Polk (1767-1822).

Created from life by a diverse and talented group of international artists, including several by Charles Willson Peale.

Orphaned at the age of ten, Polk was raised in Charles Willson Peale's household and was one of the illustrious artist's first pupils. Peale encouraged his students to learn by making copies of existing paintings, and one of Polk's earliest documented canvases-which dates from 1783, when he was sixteen-is a bust portrait of George Washington after a work by his famous uncle.

Polk likely found inspiration for George Washington at Princeton in Peale's well known 1779 painting of the subject, which was commissioned by the Supreme Executive Council of Pennsylvania for its council chamber at Independence Hall in Philadelphia (and is now in the collection of the Pennsylvania Academy of the Fine Arts). This canvas celebrates Washington's victory at Princeton, New Jersey on January 3, 1777- an early win that bolstered American morale and renewed confidence in the Revolutionary War effort. The portrait was an immediate success, and Peale was inundated with requests for replicas. He painted at least 25 between 1779 and 1781, including a 1780 version in Mount Vernon's collection that is believed to have been commissioned by Washington's friend and fellow officer, Elias Boudinot of New Jersey.

This canvas celebrates Washington's victory at Princeton, New Jersey on January 3, 1777- an early win that bolstered American morale and renewed confidence in the Revolutionary War effort. The portrait was an immediate success, and Peale was inundated with requests for replicas. He painted at least 25 between 1779 and 1781, including a 1780 version in Mount Vernon's collection that is believed to have been commissioned by Washington's friend and fellow officer, Elias Boudinot of New Jersey.

Peale and Polk's renditions of the Battle of Princeton differ in a number of significant ways. Indeed, the similarities between the two paintings end with their three-quarter length vertical format and the artists' inclusion of Princeton University's Nassau Hall (where the battle concluded) in the background. 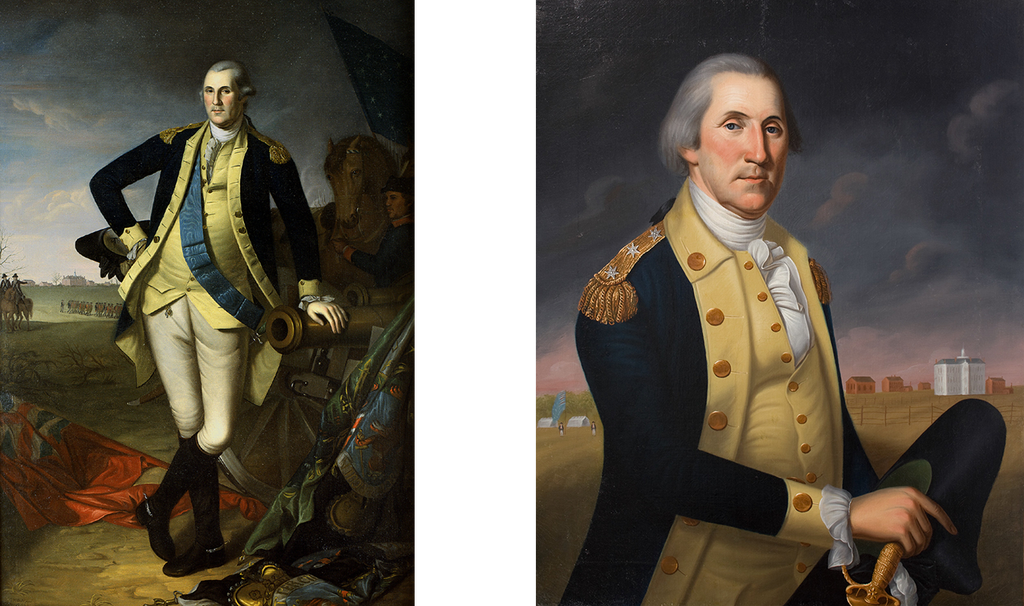 These differences in approach to the theme reflect the two artists' very different relationships to the historic battle. Charles Wilison Peale commanded a company of Philadelphia militia during the war, and served under George Washington at Princeton. His energetic canvases are first-hand recollections painted while his memories were still fresh and the war ongoing.

Charles Peale Polk was just ten years old during the Battle of Princeton; by the 1790s, when he turned his brush to the subject, it had entered the realm of history painting. His canvas possesses a gravity and monumentality befitting a retrospective image of the landmark event.

"To Obtain the Honorable Privilege of One Short Setting"

Where Charles Willson Peale's 1779 painting served as the thematic inspiration for Polk's canvas, the elder artist's 1787 life portrait of Washington taken during the Constitutional Convention in Philadelphia served as his source for the commander in chief’s physical likeness. Polk had attempted to secure his own sitting with the President, but to no avail.

On August 6, 1790, he wrote to Washington asking “to obtain the Honorable privilege of One Short Setting.” According to this letter, Polk had already “Executed Fifty Portraits” of the subject, but the artist posited that if he were provided a visitation with the president he could produce “more Just and Finished performances.” He expressed his aim to paint Washington so that his “Charector [sic] never be Obliterated from the hearts of True Americans.”

It is unclear whether Washington responded to Polk; however, the close relationship between the head in his 1790s paintings and that in Peale’s 1787 life portrait suggests that the younger artist was not successful in his efforts. Polk’s adaptation of a 1790 portrait of Washington’s head to his 1777 subject imbues the commander in chief with a mature self-assurance that he had not yet achieved in the early years of the Revolution.

Read a transcript of Polk's Letter

The Style of Polk's Likenesses

Despite its origins in Charles Willson Peale's earlier images, Polk's likenesses of the General Washington are distinctly his own. In addition to the numerous iconographical variations between the two artists' portraits, Polk's style of painting differs from that of his uncle.

The younger artist's emphasis on line and surface decoration-his use of broad swaths of opaque color contained by sharp outlines-distinguish his aesthetic from the more conventional modeling of Peale's work. A comparison of Polk's 1783 bust likeness of Washington, which was made directly under Peale's supervision, and Mount Vernon's canvas, painted by the artist a decade later, demonstrates that a confident Polk had come into his own by this time.

The Mount Vernon Ladies' Association's acquisition of Charles Peale Polk's George Washington at Princeton was a particularly fitting purchase in 2009, as it coincided with the staging of the special exhibition George Washington & His Generals in the F. M. Kirby Foundation Gallery of the Donald W. Reynolds Museum. The majestic painting made its debut as part of Mount Vernon's ambitious traveling exhibition, Discover the Real George Washington, which opened in Pittsburgh in February of 2010 and travelled the country through 2013.