When Gilbert Stuart put brush to canvas during George Washington’s presidency, he painted the image most recognized today.

Stuart wanted to paint Washington, for he expected that he could make a "fortune" on images of the Revolutionary War hero and American leader. At the time the president sat for Stuart, the artist apparently tried to relax his sitter, offering, "Now, sir, you must let me forget that you are General Washington and that I am Stuart, the painter," to which the president responded, “Mr. Stuart need never feel the need for forgetting who he is and who General Washington is.” After Stuart's initial portrait of Washington, he made more than one hundred copies for American and European patrons eager to own an image of the illustrious sitter. They were of three types: a waist-length Vaughan version showing the right side of Washington's face; an Athenaeum variant displaying the left side; and a full-length Landsdowne example. The artist promised to give Martha Washington the original canvas of the Athenaeum portrait used to make the copies but unfortunately never kept his word.

This Athenaeum-type portrait was purchased from Stuart by George Beck, a landscape artist whom Washington patronized, for Major Alexander Parker of Lexington, Kentucky. The canvas shows Washington dressed in a black velvet suit with a white lace jabot at his neck, and his powdered hair pulled back into a queue ornamented by a sawtoothed ribbon rosette. His lips appear swollen and his mouth uncomfortable, owing to a new set of ill-fitting dentures. For a person conscious of the impression made by his outward appearance, it would likely displease our nation's first president to know that the likeness taken at a moment of' discomfort would become the best known. Indeed, the image was widely circulated through Stuart's copies as well as by painters, engravers, and lithographers who copied the original work. Stuart's painting became, and remains, "the household Washington of the world.” 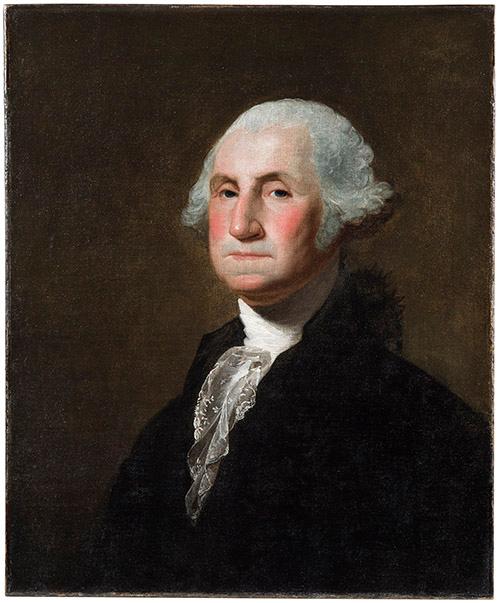 Following the success of Gilbert Stuart’s 1795 portrait of George Washington, Martha Washington convinced her husband to sit again to the artist in 1796, for a pair of portraits of the couple. Though Mrs. Washington implored Stuart on numerous occasions to send the portraits (now known as the Athenaeum portraits) to them, he never did. Instead, the painter left the life works unfinished, and used them as the source for numerous copies. There are approximately 75 so-called “Athenaeum-type” portraits of George Washington. Though each version is clearly based on the one source, eventually owned by the Boston Athenaeum (now jointly owned by The National Portrait Gallery and the Museum of Fine Arts, Boston), the individual works often have distinct appearances, with variations in costume and/or background.

Mount Vernon’s Gilbert Stuart portrait of Washington has long been considered among the finest of these “replicas”. Stuart’s pupil Matthew Jouett reportedly declared it “one of Stuart’s best copies of his great portrait,” and its authenticity and quality were attested to in 1804 by two other artists in 1804—the English landscape painter George Beck and the miniature portrait painter Benjamin Trott. Beck’s paintings of the Potomac River were purchased by George Washington in 1797 and now hang at Mount Vernon; Trott was one of Stuart’s pupils.

While Stuart never finalized the costume in the Athenaeum portrait, his completed paintings vary in their approach to costume. A small group of works from the late 1790s contain lace shirt ruffles, while later examples often simplify them. The extremely finely painted shirt ruffle in Mount Vernon’s example is comparable to the 1797 example at the Huntington Library. By 1803, Stuart was more typically simplifying the shirt ruffle. Stuart biographer Charles Mount, who viewed Mount Vernon’s portrait (H-4) in 1977, described it as a “true likeness,” and suggested it was likely painted around the time of the Yale University Art Gallery portrait. The Yale work, which is currently dated 1796-1805, also shares with H-4 a very finely painted shirt ruffle of lace.

The delicacy of touch in the shirt ruffle here is counterpointed by the very loose and painterly approach to the powdered hair, in shades of cream and gray. The coloration and painting of the hair is not unique, but is seen in many of Stuart’s works of both Washington and other sitters. Also typical of Stuart is the range of broadly painted flesh tones—rosy pink for cheeks and lips, darkening around the mouth for a five o’clock shadow, and the clever highlights at nose and forehead to suggest light. The facial structure conveyed in Mount Vernon’s and other Stuart portraits of Washington is striking. The most prominent aspect of the Athenaeum portraits—and that which has been frequently discussed in relation to the works—is the visible swelling and discomfort around the mouth. As documented by Martha Washington’s grandson, George Washington Parke Custis, before the sitting, the President had a new set of dentures “of Sea horse (hippopotamus) ivory teeth. These, just made, were too large and clumsy, and gave that peculiar appearance of the mouth seen in Stuart’s picture.”

There has been little commentary regarding Stuart’s characterization of Washington’s eyes, which here and in other Athenaeum portraits are set very deeply in their sockets, appearing nearly hooded, and set off by the dramatic line of the nose. Interestingly, in H-4, as in Adolf Wertmuller’s portraits of Washington of 1794 and 1795, the pupils of the eyes appear somewhat flattened or ovoid rather than round. Isaac Weld, in his Travels Through the States of North America, and the Provinces of Upper and Lower Canada, During the Years 1795, 1796, and 1797, indicated that Stuart told him “that there are features in his [George Washington’s] face totally different from what he ever observed in that of any other human being; the sockets for the eyes, for instance, are larger than what he ever met with before, and the upper part of the nose broader.”

Excerpt from The George Washington Collection: Fine and Decorative Arts at Mount Vernon by Carol Cadou