Although the burning of Washington, D.C. occurred long after George Washington’s death, the first president played an important role. Dolley Madison chose to have his portrait rescued from the White House just before the building went up in flames.

“Our kind friend, Mr. Carroll, has come to hasten my departure, and is in a very bad humor with me because I insist on waiting until the large picture of Gen. Washington is secured, and it requires to be unscrewed from the wall. This process was found to be too tedious for these perilous moments; I have ordered the frame to be broken, and the canvass taken out it is done, and the precious portrait placed in the hands of two gentlemen of New York for safe keeping.”1

The Burning of Washington

The Burning of Washington—one of the most noteworthy episodes of the War of 1812—took place on August 24, 1814. After capturing the capital city, the British famously burned many of its most important buildings, including the White House.

Hanging in the White House was a painting of George Washington, known as Gilbert Stuart’s Lansdowne Portrait. Today it is one of the most iconic representations of Washington.

Rescuing the painting was no simple feat. The eight-foot-tall portrait was bolted to the wall of the dining room, making it difficult to move or transport. According to Paul Jennings, a teenage footman enslaved by the Madisons, steward John Sioussat and gardener Thomas McGaw were instructed by Mrs. Madison to hack away at the portrait’s frame. Once the painting was free, it was turned over to two New Yorkers, Jacob Barker and Robert G.L. De Peyster, for safekeeping.

While preserving the portrait was important, Mrs. Madison felt it was equally critical that it not be allowed to be confiscated by the British. She instructed the men to destroy the painting before turning it over, admonishing them not to allow it “into the hands of the enemy, as their Capture would enable them to make a great flourish”.2

After the American forces announced their retreat from their position at Bladensburg, Maryland, Charles Carroll rushed to the White House to hurry the first lady to safety.

Copies of the Original

Many copies of the original Lansdowne portrait were made by Gilbert Stuart and other artists of his era. When you examine the two versions of the same painting presented below, differences between the original and its copies are immediately apparent.

Art historians have carefully analyzed the portrait over the years and have developed interesting theories and interpretations.

Is there a typo in the version of the painting that Mrs. Madison rescued?

How did Stuart turn the creation of Washington portraits into such a thriving business?

The version on the left is a copy of the original, which is shown on the right. This particular copy, provided courtesy of the White House Historical Association, is the version rescued by Dolley Madison. 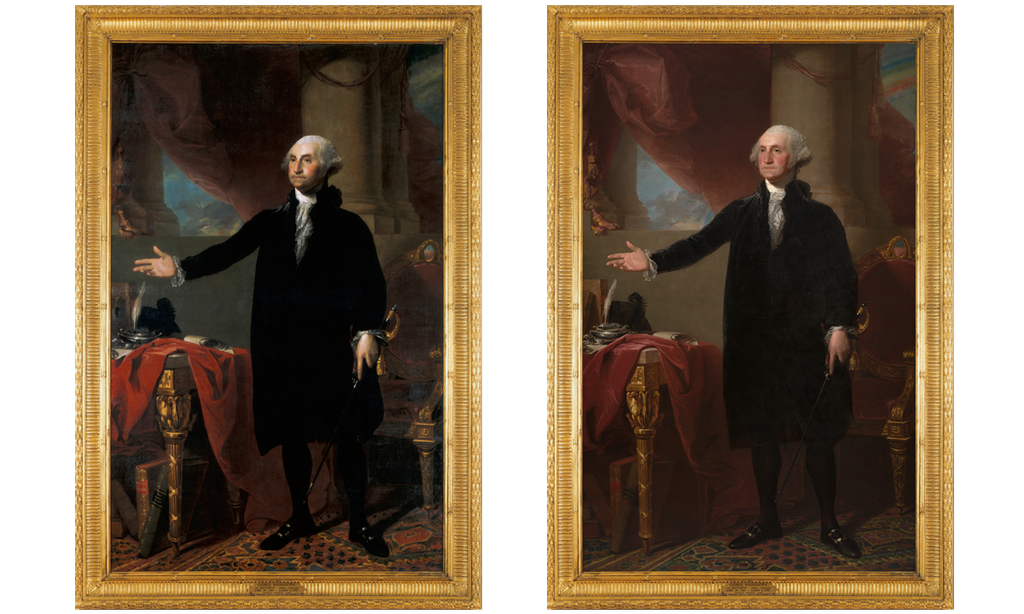 See the Painting at the National Portrait Gallery

The original life-sized portrait, painted by Gilbert Stuart in 1796, hangs in the Smithsonian Institution’s National Portrait Gallery in Washington, D.C.

It was a gift to the Marquis of Lansdowne, an English advocate for American independence from Senator and Mrs. William Bingham of Pennsylvania.

Replicas painted by Stuart are on display in the East Room of the White House, the Old State House in Hartford, Connecticut, and the Pennsylvania Academy of the Fine Arts Museum. The copy that Mrs. Madison rescued still hangs in the White House.