George Washington was the most illustrated American of the 18th century, and he became perhaps even more frequently depicted during the next one hundred years.

Washington's sudden death on December 14, 1799, occurred at a critical point in American history and occasioned an unparalleled show of artistic admiration aimed at a stunned and sorrowful public.

The search for a national identity in the decade after the formation of the United States of America found a ready symbol in the heroic character of Washington. His virtues were widely proclaimed from pulpit to podium to press, and Americans who could not attend the funeral at Mount Vernon staged elaborate "mock funerals" around the country.

Artists of all media exalted Washington by envisioning him in the tradition of Christian religious imagery, as a sainted figure being transported to heaven.

In this print, the artist captures the veneration in which Washington was held by Americans in the weeks following his death.

Seated upon a throne-like cloud and attired in classical robes, Washington ascends to heaven above Mount Vernon, while a cherub prepares to crown him with the "wreath of Immortality." A pair of onlookers, Generals Joseph Warren and Richard Montgomery, extend greetings to the risen hero. Both Warren and Montgomery were both killed in action during the first year of the Revolutionary War, and engravings depicting their deaths hung in the New Room of the Mount Vernon Mansion. Below them is a tiny view of the Mount Vernon Mansion—one of the earliest such views to appear in print.

Allegorical imagery of Washington began to appear soon after his death. Perhaps the earliest apotheosis of Washington appeared less than three weeks later, at a Philadelphia exhibition that featured an allegorical figure “representing Fame, conducting a Hero to immortality, an angel presenting to him a civic crown.” This display may have inspired the young Philadelphia artist Rembrandt Peale, who had painted the first president alongside his famous father Charles Willson Peale, to create his own "apotheosis."

A significantly more complex version of the apotheosis of Washington appeared in an 1800-1802 engraving by another Philadelphia artist, John James Barralet. This engraving shows Washington being raised from his tomb toward heaven by the winged figures of Immortality (left) and Time (right) and surrounded by figures and emblems representing America and the virtues of Faith, Hope, and Charity, as well as a weeping Native American. 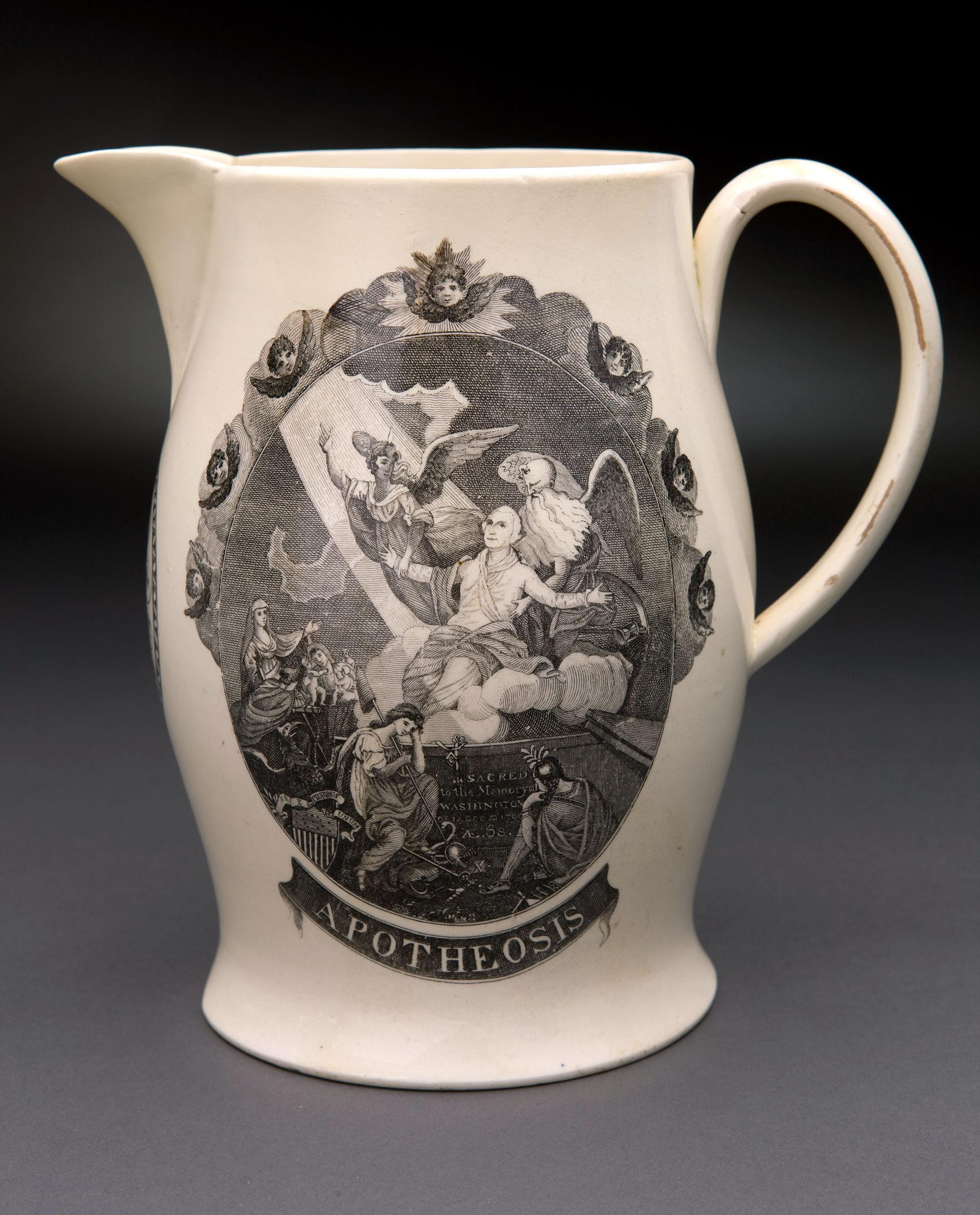 Barralet’s composition is perhaps best known from its appearance on ceramic jugs, produced in England for the American market during the first quarter of the 19th century. Popularly known as "Liverpool jugs," after the city where they were produced, these simple creamware vessels displayed a variety of patriotic motifs. The technique of transfer-printing allowed images like Barralet’s to be reproduced in large quantities with great exactness. On the jugs, it is set in an oval medallion topped by seven winged cherubim, accompanied by an inscription (below the spout) that proclaims Washington, “ A MAN without example, A PATRIOT without reproach.”

These important items are only three examples of a remarkably rich body of artistic and literary material created to remember George Washington. Such productions were vital to Americans and admirers around the world who desired tangible symbols to express their admiration for Washington and their dismay at his death. "His example is complete," commented President John Adams upon receiving the news of Washington's passing, "and it will teach wisdom and virtue to Magistrates, Citizens, and Men, not only in the present age, but in future generations".