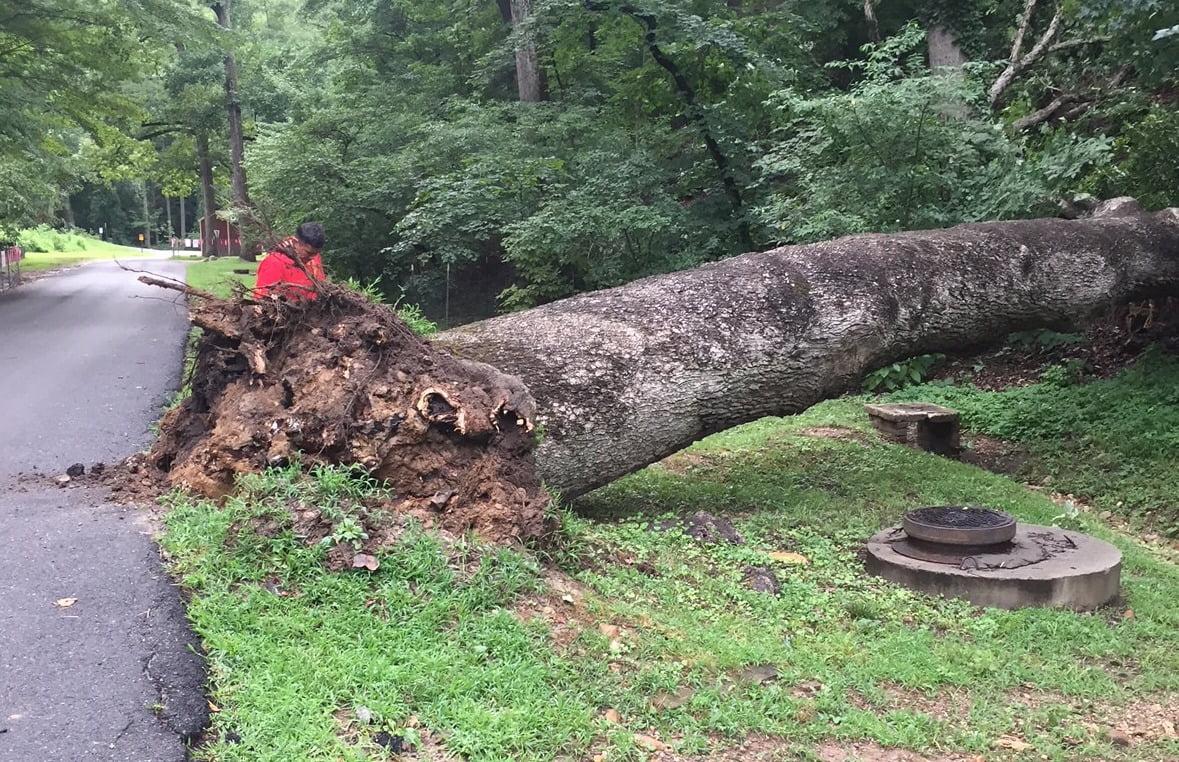 On Tuesday, July 24, Mount Vernon lost a piece of living history—a white oak tree dating to Washington’s time. Located away from public access, the historic tree that lived through the Civil War fell due to the overly saturated ground.

The oak’s trunk had a circumference of almost 12 feet (46 inches in diameter). Between 2004 and 2005, dendrochronologists took a core sample of the white oak to determine its age. They stated that the tree's age was no later than 1780, meaning that tree rings could accurately be counted to 1780, but that some rings were indistinguishable indicating the tree is actually older. According to Mount Vernon’s Director of Horticulture, Dean Norton, the tree had definitely been standing for 238 years and even longer, but the exact date cannot be determined.

The Mount Vernon Ladies’ Association in 1860 opened the estate to the public, shortly before the Civil War began in 1861. A large percentage of visitors to Mount Vernon during the war were soldiers. To ensure Mount Vernon remained neutral ground, soldiers could neither be armed nor dressed in uniform to visit the estate. Miss Tracy, secretary to the MVLA’s chairwoman Ann Pamela Cunningham wrote, “They have behaved very well about it. Many of them come from a great distance and have never been here, and have no clothes but their uniforms. They borrow shawls and cover up their buttons and leave their arms outside the enclosures, and never come but two or three at a time. That is as much as can be asked of them.”

In 1865 toward the conclusion of the Civil War, Union soldiers carved a five-pointed star and a Latin or Greek cross into this oak tree. Over the years, the carvings were periodically re-cut to prevent the bark from obscuring them.

“While there are differing opinions on the symbols and what they may represent, we have some clues to point us in the right direction,” said Mount Vernon’s director of archaeology Luke Pecoraro.

One photo from 1932 is labeled, "Regimental (crossed out and replaced with Corps) insignia (added in parentheses: Logan Corps - Sherman's Army 1865) on an old oak tree below the Power house. Was cut by a New York unit during the Civil War."

According to Pecoraro, the corps insignia were developed in 1863—the five-pointed star symbolized the 12th corps (later the 20th corps), and the 6th corps adopted the Greek cross. However, in 1865, General John Logan served with Sherman's Army as the corps commander of the 15th corps, whose badge was a cartridge box. Additionally, Logan never commanded any of the New York regiments. Is the label inaccurate?

Logan and his corps were definitely present for the Grand Review of the Armies held in Washington DC on May 23-24, 1865. During this event, about 145,000 men (including Logan) were under the overall command of General Sherman. Many of the regiments who were with Logan that visited Mount Vernon arrived after the Grand Review before returning to their home states.
“If they are indeed corps badges,” said Pecoraro, “my educated guess of working with the evidence that we have is that they were carved by members of the 20th corps. The 20th corps was part of Sherman’s Army, as was Logan’s 15th, and perhaps oral history was conflated to combine the two. The 60th and 102nd New York regiments both visited Mount Vernon, both were in the 20th corps, served with Logan, and participated in the Grand Review.”

“As a compelling case for the 102nd [corps], before the regiment was mustered out, members of the 184th New York were transferred to it; the 184th had been part of the 6th corps (Greek Cross)," he continued. “The 102nd was in service and stationed in Alexandria at the war’s end before the men were sent home to New York in July of 1865. Therefore, it seems logical to me why you might see the star and cross together, and perhaps were carved by the 102nd as it would have included men who served in both corps.”