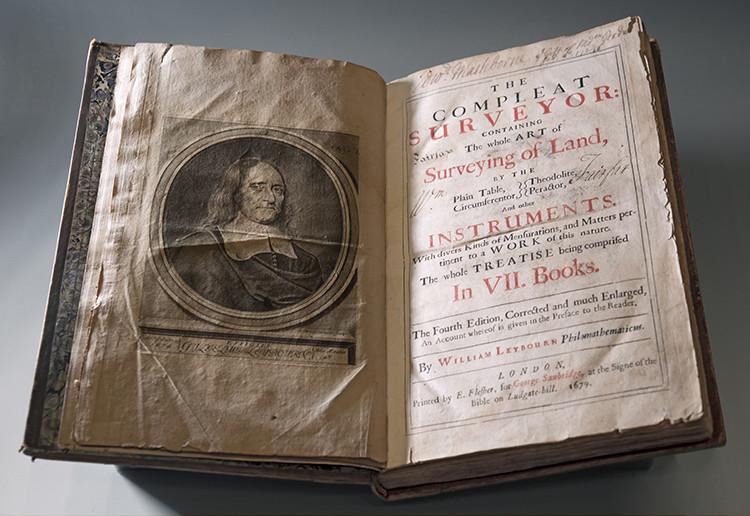 MOUNT VERNON, VA – The Fred W. Smith National Library for the Study of George Washington (Washington Library) celebrates its fifth anniversary September 27 with the acquisition of a book from Washington’s personal library. The 1679 edition of The Compleat Surveyor by William Leybourn offers the opportunity to foster additional research on Washington’s education and his early work as a surveyor.

“This is a truly remarkable acquisition,” said Kevin Butterfield, executive director for the Washington Library. “We have now brought a book back home to Mount Vernon that we know with certainty that Washington used, as a very young man, to learn an immense amount about how to survey land.”

Washington began his surveying career at the age of 17 as surveyor for Culpeper County, Virginia. He began studying The Compleat Surveyor four years prior to this appointment when he borrowed the book from his friend and neighbor, Colonel William Fairfax. Washington never returned the book, and it remained in his possession for 54 years. Problems and solutions that Washington copied directly from this book have survived in his ‘exercise books,’ which date from his early teenage years. It is exceptionally rare to have a copy of a book for which there is clear evidence of exactly when and how a young Washington put it to use.

Generously funded through a gift of Eleanor R. Seaman, Vice Regent Emerita for Wisconsin of the Mount Vernon Ladies’ Association, the book’s flyleaf bears the confirmed signature of William Fairfax, and the name “Wm Fairfax” appears on the title page written in calligraphy, most likely by George Washington. Located opposite the title page are several handwritten math equations, possibly the work of a young Washington.

This new acquisition joins Mount Vernon’s collection of original books and manuscripts, which is housed in the Fred W. Smith National Library for the Study of George Washington. The 45,000 square-foot Library safeguards Washington’s papers, manuscripts, and books, as well as thousands of important 19th-century documents. Since its grand opening in 2013, fueled by a $38 million contribution by the late Fred W. Smith, chairman of the Donald W. Reynolds Foundation, the Library has served as a center for scholarship on the founding era and educational outreach, touching the lives of students, and researchers around the world.  The Washington Library has hosted teachers from 43 states since its opening in 2013.

As the leading educational institution focused on Washington’s life and legacy, the Library has also expanded its on-site programs and online resources. Since 2013, The George Washington Teacher Institute Residential Programs have welcomed hundreds of educators for immersive courses of study. The Library’s online research repository, the digital encyclopedia, has more than 10,400,000 lifetime users podcast has aired 67 episodes with 60,000 listeners. The Library is also home to the George Washington Leadership Institute, which provides leadership development programs for established and emerging corporate, government, military, and academic professionals.