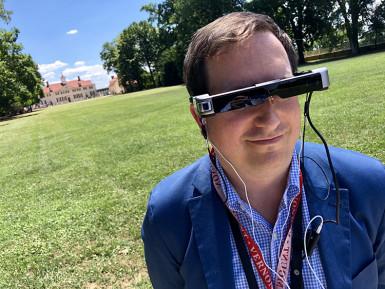 The “Mount Vernon in AR” tour invites guests to enjoy lesser-known stories of the first president’s estate revealed by immersive 3D imagery layered over a view of the real landscape. Holograms of George and Martha Washington, 360-degree recreations of former buildings and gardens, and images of artifacts placed in their original context, are among the many tools used in the one-of-a-kind storytelling. A preview of the tour is now available to visitors on a limited basis for $12.50 in addition to general admission. This experience is weather dependent.

“The augmented reality tour enables us to do things we cannot do every day: show primary sources next to places and objects, do large-scale reenactments of key events, and take guests back through time to show them what Mount Vernon looked like throughout Washington’s entire lifetime,” said Matt Briney, vice president of new media for Mount Vernon.

The tour begins in the Ford Orientation Center, where the Washington, who loved the emerging technologies of his time, invites visitors to tour the modern landscape of beloved his home enhanced by “augmented reality inside your spectacles.” At stops throughout the estate guests see and hear moments from the lives of Mount Vernon’s residents come to life, such as young Washington playing an 18th-century lawn game or George, the enslaved gardener, describing the role of the greenhouse.

While guests overlook the Potomac River, they will learn little-known facts about the estate’s fishing operation and view the Royal Navy’s HMS Savage anchoring offshore during the Revolutionary War. Augmented reality technology shows the deterioration of the Mansion as it passed from owner to owner until the Mount Vernon Ladies’ Association saved it from ruin. 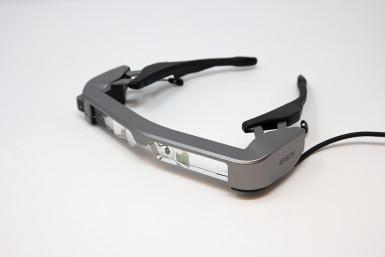 Mount Vernon staff wrote and produced original content for the tour, which uses the technology platform developed by ARtGlass. ARtGlass is the first company in the world to bring wearable augmented reality at scale to the arts and cultural sector. Their technology has been used by more than 700,000 visitors at iconic museums and archeological sites in Europe and earlier this year the company announced its expansion to North America with Mount Vernon as one of its flagship U.S. sites.

“ARtGlass is passionate about cultural storytelling with technological innovation and is excited to partner with forward thinking sites like Mount Vernon to create new and memorable experiences for their guests,” said ARtGlass CEO and Founder, Greg Werkheiser.

Through thought-provoking tours, entertaining events, and stimulating educational programs on the estate and in classrooms, Mount Vernon strives to preserve George Washington’s place in history as “First in War, First in Peace, and First in the Hearts of His Countrymen.” Mount Vernon is owned and operated by the Mount Vernon Ladies’ Association, America’s oldest national preservation organization, founded in 1853. Admission fees, restaurant and retail proceeds, along with private donations, support the operation and restoration of Mount Vernon. With its latest initiative, The Fred W. Smith National Library for the Study of George Washington, Mount Vernon is affirming its status as the preeminent center of learning about George Washington, his life, character of leadership, and legacy. In addition to safeguarding original books and manuscripts, the Library serves as a center for leadership, where scholars, influencers, and other luminaries come together to talk about the past as well as the future, inspired by Washington’s extraordinary life, achievements, and character. See: mountvernon.org

ARtGlass is the first company in the world to bring wearable AR to the arts and cultural sector. The company’s early success is rooted in its team’s combination of leading-edge technologists, substantive specialists in art, archeology, architecture, landscapes and strategists experienced in public engagement at historical, museum and cultural sites. ARtGlass co-founders Greg and Marion Werkheiser are also founders of Cultural Heritage Partners, the leading law, policy, and business strategy firm serving the cultural heritage sector globally. See: artglassus.com.