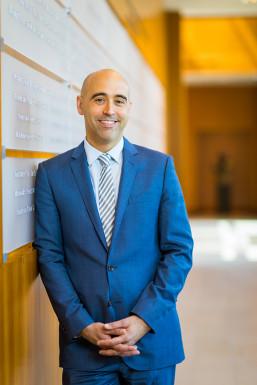 MOUNT VERNON, VA—The Mount Vernon Ladies’ Association today tapped a noted American historian, Dr. Kevin Butterfield, to serve as the executive director of The Fred W. Smith National Library for the Study of George Washington (Washington Library), the premier center for the study of our first President.  As the executive director of the Washington Library, Butterfield will foster serious scholarship about George Washington and his era while also developing new and furthering existing cutting-edge academic and public programs, as well as growing the library collection.

“Kevin brings a fresh set of bold ideas and vision to take the Library to the next level—He’s a great scholar, but also has the rare gift of leadership,” said Mount Vernon president Doug Bradburn. “Our first five years were exceptional; I can’t wait to see what Kevin does in the coming years. The country needs George Washington’s wisdom and example as much as ever.”

Butterfield comes to Mount Vernon from the University of Oklahoma, where he serves as Director of the Institute for the American Constitutional Heritage and Constitutional Studies Program and holds an appointment as Wick Cary Professor and Associate Professor of Classics and Letters.  A specialist in the founding era, he boasts a lengthy list of publication and teaching credits on topics related to the founding period, including one prize-winning book about early American legal history and several articles.

Butterfield has been honored with many fellowships to support his research from institutions such as the American Antiquarian Society, Winterthur Museum, the National Endowment for the Humanities, the Andrew W. Mellon Foundation at the Huntington Library, the Robert H. Smith International Center for Jefferson Studies at Monticello, and many others. In his role as the head of the Institute for the American Constitutional Heritage at the University of Oklahoma, he engaged multiple public audiences in exploring current affairs with a historical approach focused on the Constitution and civic engagement.

“Kevin Butterfield is a superb choice to be the new Executive Director of the Fred W. Smith National Library for the Study of George Washington,” said Pulitzer Prize-winning historian Gordon S. Wood.  “He combines excellent administrative experience with a deep understanding of history, precisely the talents needed for this important position.”

Butterfield will become the second historian to lead the Washington Library, replacing its founding director, Dr. Douglas Bradburn, who was named president of George Washington’s Mount Vernon in January 2018. Since its opening in 2013, the Washington Library has rapidly established itself as the premier center for the study of George Washington, a leading institution fostering scholarship and education in the history of the founding era of the U.S., and an innovative leader in the creation and dissemination of historical learning to a variety of audiences.

The Washington Library has held impactful conferences with prominent institutions in early American history, created a popular research fellowship program, and hosted more than 24,000 people at public events, teaching institutes, and leadership programs. The Washington Library has produced award-winning documentaries on the founding era, created ground-breaking educational experiences both on-site and across the country, and established the George Washington Leadership Institute as a top program for leadership studies.