Where is it Located

About the Pioneer Farm

Located on the banks of the Potomac near the wharf, the four-acre Pioneer Farm explores George Washington’s role as visionary farmer and represents the more than 3,000 acres he cultivated during the second half of the 18th-century. It also offers visitors a chance to learn more about the lives Mount Vernon enslaved fieldworkers who put Washington’s agrarian ideas into practice.

Washington used Mount Vernon as a laboratory for testing and implementing progressive farming practices. For example, in the mid-1760s, he became one of the first large-scale Virginia planters to switch his main cash crop from tobacco— traditionally a staple of the colony’s economy—to wheat. At the same time, he began experimenting with composting and crop rotation as well as with more efficient designs for basic farming tools such as the barrel plow and various harrows.

Washington’s life as a farmer sheds light on his struggle with one of the most difficult facts of his day: slavery. Although he eventually opposed the institution, his five farms relied on the labor of more than 300 enslaved people. Over time, Washington resisted the harshest punishments, resolved not to buy or sell any more slaves, and refused to break up families. Yet the 132 enslaved field workers he had at his death—most of them women—performed the backbreaking work of clearing, plowing, planting, and harvesting.

At the Pioneer Farm, which is most active from April to October, visitors can see the 16-sided treading barn Washington designed and the re-created cabin similar to those inhabited by an enslaved family of field hands. Various demonstrations are conducted throughout the season, following Washington’s agricultural calendar. Visitors can observe tasks the enslaved works performed, such as hoeing the fields, cracking corn, and winnowing wheat. Sheep, mules, horses, and oxen work on the site, and costumed interpreters explain some of Washington’s agricultural techniques, such as his seven-year crop-rotation plan.

The site is a 15-minute walk from the Mansion. It is also accessible via a shuttle bus that runs continuously between the Donald W. Reynolds Museum and Education Center and the farm from April to October. 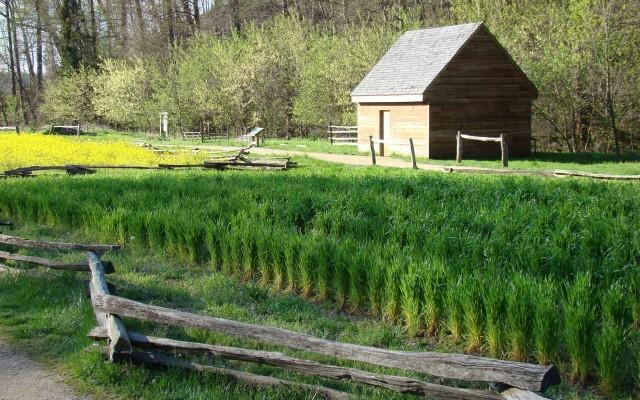