Enjoy the longer days and Mount Vernon’s blooming gardens during this evening reception. Take a leisurely stroll through the historic area while enjoying a menu of hors d’oeuvres curated by Michelin-starred chef and owner of Masseria in Washington DC Nicholas Stefanelli. The hors d'oeuvres will be paired with wines made by AldenAlli. Stefanelli and Dan Kosta, co-founder of AldenAlli, will be on site and mingling with guests throughout the evening.

Listen to General Washington reminisce as select readings from Cato, his favorite play, are read by costumed characters. Following the performance, visit with friends and enjoy drinks and colonial music as the sun sets. As a popular play in the 18th century, General Washington had Cato performed for his men in the spring of 1778 after a hard winter at Valley Forge, defying a congressional ban on theatrical productions to entertain and inspire his officers and troops.

The dress code is garden chic. There will be no Mansion tours during this event. Rain date: June 16. 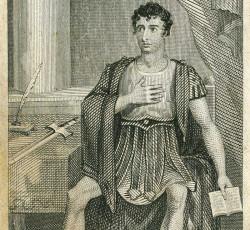 Written by Joseph Addison in 1713, this play recounts the final days of the Roman Senator Marcus Porcius Cato (95-46 BCE), a Stoic whose resistance to Julius Caesar made him an icon of republican virtue and liberty. He opposed Caesar’s tyrannical assertion of power and took arms against him, ready to sacrifice everything for freedom.

Addison’s depiction of Cato influenced friends of liberty on both sides of the Atlantic. George Washington shared Addison's enthusiasm for Cato's self-sacrificing republican virtue, and frequently quoted from Addison's play as commander-and-chief of the Continental Army and as president. 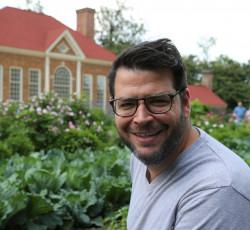 Nicholas Stefanelli is the chef and owner of Officina and Masseria in Washington, DC. Stefanelli grew up in suburban Maryland with a strong influence coming from his close relationship to his Greek and Italian grandparents whose culinary heritage was a fact of life. In addition to his Michelin Star for Masseria, Stefanelli was named the 2010 Rising Star by the Restaurant Association of Metropolitan Washington and was nominated for the Rising Star Award by the James Beard Foundation. 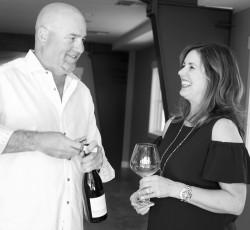 The passion of Dan Kosta and the Lagasse family is manifested in the Burgundian varietals of Pinot Noir and Chardonnay, grown in Dan's home state of California. Their Chardonnay is farmed in the cool hills of Santa Barbara, and crafted into a crisp, lively wine, with only a small influence from oak barrels. Similarly, their Pinot Noir from the Sonoma Coast is elegant yet complex, with the vineyards being guided by gently winemaking and minimal manipulation. Zinfandel from Sonoma County's Russian River Valley is the quintessential California grape. This wine balances the tension between boldness and elegance, making it the perfect spring sipper.