The author will sign books purchased at Mount Vernon after the lecture.
Register

In the spring of 1778, General George Washington wrote to his friend Landon Carter about a rumored “disposition in the Northern Officers to see me superceded in my Command.” This was as candid a statement as the general ever made about the so-called “Conway Cabal” of patriot officers and politicians critical of his leadership. Most early historians of the Revolution took the threat to Washington seriously, but by the mid-twentieth century interpretations had reversed, with the plot—if one existed—posing no real danger to the commander-in-chief. Yet, as historian Mark Edward Lender reveals in his compelling Cabal! The Plot Against General Washington, clues found in original new research provide a more comprehensive understanding of the personalities and political maneuverings of those involved in the Cabal, and the real nature of the challenge to Washington.

The Cabal tested Washington as few other things did during the war and perhaps tempered him into the man we remember today. Washington adroitly navigated the challenges to his leadership, meeting and defeating every attempt to curtail his authority. His response revealed a leadership style that saw him safely through the war, and gave him overwhelming support from his countrymen to become their first president. 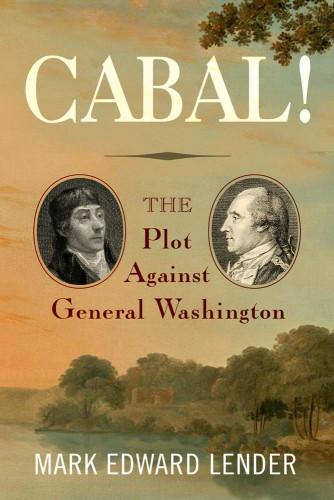 Mark Edward Lender has a Ph.D. in American History from Rutgers University. He is Professor Emeritus of History at Kean University, from which he retired as Vice President for Academic Affairs in 2011. He is the author or co-author of eleven books and many articles and reviews, and his writings have won awards for history, writing, and research. He was a finalist for The George Washington Prize, from Mount Vernon and Washington College, with Garry Wheeler Stone, for Fatal Sunday: George Washington, the Monmouth Campaign, and the Politics of Battle, 2017.