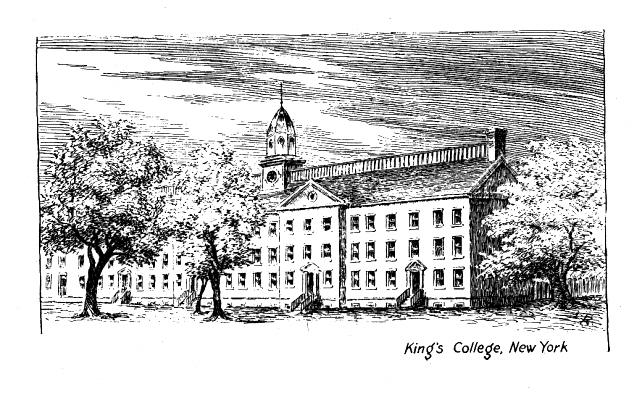 King’s College in New York City (today Columbia University), was created in 1754 by a Royal charter from King George II as an Anglican college, headed by the Church of England. At its founding King’s was the only college in New York. John (“Jackie”) Parke Custis, George Washington’s stepson, attended King’s College from May to December 1773.

Controversy surrounded the college from its founding. The Church of England established King’s in response to the challenges posed by other Protestant institutions of higher learning, such as the Presbyterian College of New Jersey (today Princeton University) and the Congregationalist colleges of Harvard and Yale. Non-Anglicans perceived King’s College as a threat to religious freedom because of its connections to Britain’s state church. This fear persisted for years after the college opened. In March 1773, Samuel Cooper (President of the College 1763-1775) wrote to Jonathan Boucher (a prominent Anglican minister in America) that “many of their Missionaries, from northern into the southern provinces, make it their Business. . . to decry this Institution by all possible Means; because they are convinced, from its very Constitution – (being in the hands only of Churchmen, which is very far indeed from being the Case of any other College to the northward of Virginia – and I know of none to the southward of it – they are convinced) that it must eventually prove one of the firmest Supports to the Church of England in America.”1 The college combated its reputation by taking special measures to welcome non-Anglicans such as assuring parents that teaching would include ideas from all accepted Protestant denominations and that prayer would be directly from Holy Scripture.

King’s College struggled in its early years with consistently low numbers of enrolled students. In 1774, Harvard had eight times as many pupils, and Yale four. The location of the college was one factor limiting enrollment. At the time the college’s founding, New York was surrounded to the north and west by forest which was still inhabited by Native Americans. In addition, King’s College had to compete for students with several surrounding colleges in neighboring colonies.

John Parke Custis attended King’s College at the will of his stepfather George Washington, who placed a high value on a formal education, not having received one himself. Washington took the decision of choosing a college for the primary heir to his estate very seriously, and consulted Boucher, who was also Custis’s childhood tutor. After ruling out the College of William and Mary in Virginia, Washington deliberated between the College of Philadelphia (today the University of Pennsylvania) and King’s College. Boucher recommended King’s College for social reasons and to answer George Washington’s desire for Jackie to broaden his perspective. According to Boucher, New York City offered Custis better opportunities to mix in elite military and social circles.2

On May 10, 1773, Custis and Washington left Mount Vernon for King’s College. Upon his arrival, Custis received special treatment, including a greeting from the principle and an invitation to eat with the professors. He wrote home pleased with “how agreeably everything is settled.”3 However, Jackie did not stay at the college for long. On December 15, 1773, Washington wrote to Cooper explaining that his stepson would not be returning.4 A number of factors led to the decision. First, Custis had become engaged to Eleanor Calvert, a member of a prominent family in Maryland. While Washington was not entirely supportive of the engagement because the couple was so young, Martha Washington supported it enthusiastically. Second, Jackie’s sister, Martha (“Patsy”) Parke Custis, died suddenly while he had been away at King’s College, so he, understandably, wanted to be with his family at that difficult time. Finally, Jackie had struggled in school, often choosing to skip lessons to ride or shoot.

During the American Revolution, King’s College was the only American college to stay loyal to the Crown. Still, the college did produce some notable revolutionaries, including Alexander Hamilton and John Jay. The Revolutionary War severely disrupted activities at the college. In April 1776 the College Hall was commandeered by American troops for use as a military hospital, a process which saw much of its library and scientific equipment taken and spread across the city and instruction cease. After the British regained control of the city in September of that year, they also used the hall as a military hospital. In 1784, after America secured its independence, a charter reestablished the college with conditions reflecting the ideas of the Revolution. The charter included efforts to make the board less Anglican and a name change to Columbia College.