The Battle of Saratoga, fought in two stages on September 19 and October 7, 1777, proved to be a turning point in the American struggle for independence.

This letter from August 10, 1777 is an example of a mask letter. Encrypted letters of this type were used by generals to securely send intelligence.

In the spring of 1775, Burgoyne served as deputy to General Thomas Gage in Boston. Burgoyne later expressed deep disappointment in Gage, after the Battle of Bunker Hill.

Hindered by American efforts to obstruct roads, Burgoyne's army slowed to a crawl as it approached Saratoga, where 12,000 Americans under General Horatio Gates waited. 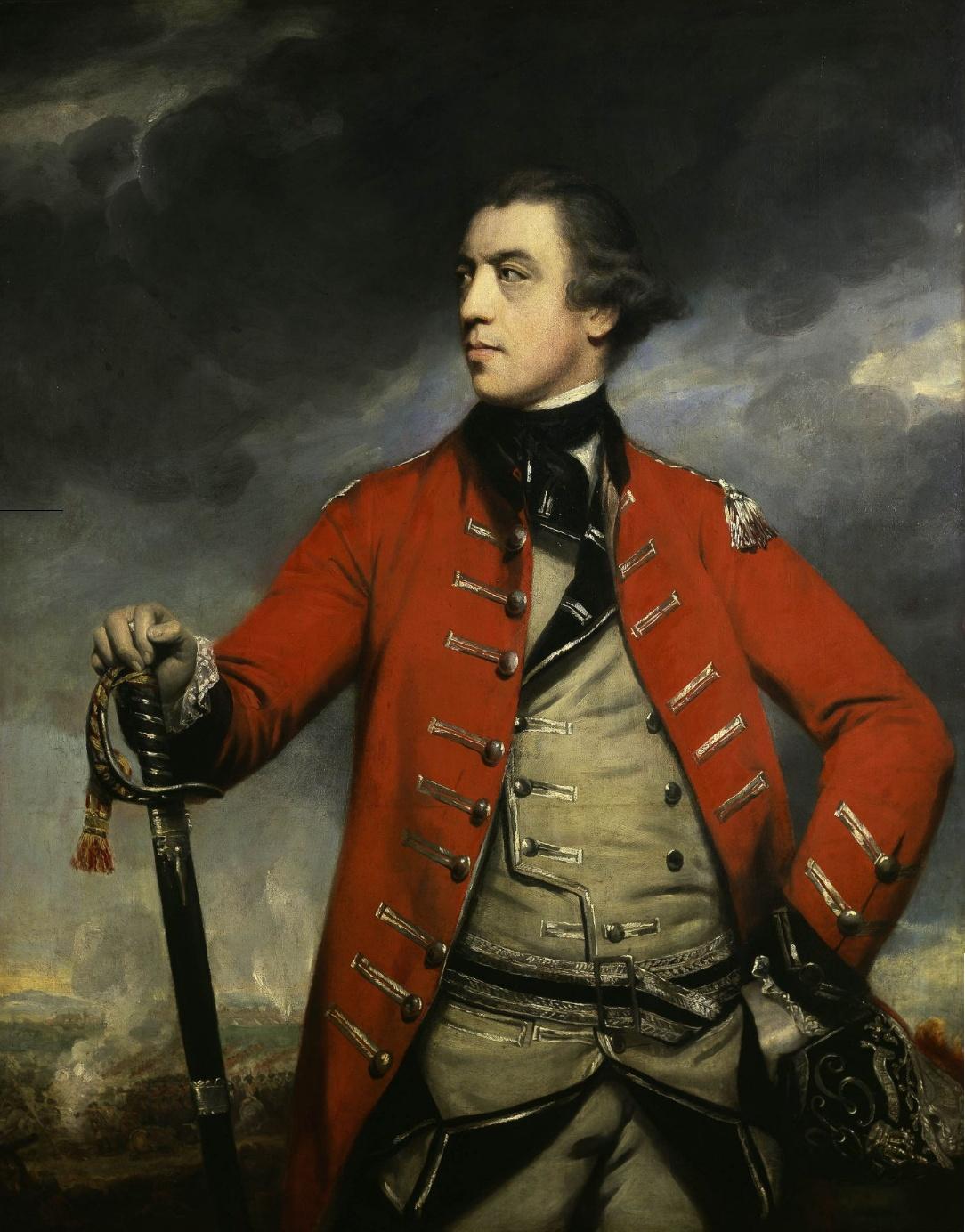 John Burgoyne served as a general in the British Army during the American Revolution. Known as “Gentleman Johnny,” Burgoyne commanded a force of 8,500 men during the 1777 campaign season in an attack on the Lake Champlain-Hudson River Vally from Canada. Burgoyne’s defeat at the Battle of Saratoga in October 1777 led to the formal alliance between France and the United States in February 1778.

Burgoyne was born on February 4, 1723, to parents Captain John Burgoyne and Anna Maria Burgoyne. It is possible, however, that he was in truth an illegitimate son, conceived through Anna Maria's suspected affair with Robert Benson, Baron Bingley. The young John Burgoyne received a classical education at the prestigious Westminster School. Although an undistinguished student, he performed well in his studies. His skills as a horseman and talent with a saber were unrivaled. During his youth, Burgoyne developed a love of wine, a keen eye for fashion, the boldness of a gambler, an insatiable quest for fame, and the reputation of a ladies’ man.

Burgoyne's military career began in 1737, when he joined the Horse Guards. In April 1744, his parents' fortune allowed him to purchase his commission as a cornet in the First Dragoons, one of the most elite cavalry regiments. However, by the time of his controversial marriage to Charlotte Stanley, the Earl of Derby’s daughter, he was nearly bankrupt. In 1751, he left the Army to lead the life of a gentleman, moving with his wife to France.

The Seven Years’ War provided Burgoyne with the perfect opportunity to achieve the fame he always sought. In 1756, he was restored to active duty. Now the rank of captain, Burgoyne was given command of the Eleventh Dragoons. Strict in standards but fair in his judgment, Burgoyne quickly earned the adoration of his men, whom referred to him as “Gentleman Johnny.” He proved himself an effective and daring commander in the attacks on Cherbourg, St. Malo, and Valencia d’Alcantara. Burgoyne emerged a hero, but his glory was short-lived when the conflict ended in 1763.

In the absence of war, Burgoyne turned to politics. Elected to Parliament in 1763, Burgoyne was one of the few men to sympathize with the American cause. During an address in the House of Commons on October 23, 1774, Burgoyne declared, “should the American colonists rebel against the treatment accorded them by His Majesty’s Government, I, for one, would not blame them.”1 In the spring of 1775, the British War Office ordered Burgoyne to Boston as deputy to General Thomas Gage. Although promoted to major general, Burgoyne disliked this post. After the Battle of Bunker Hill in June 1775, Burgoyne privately expressed deep disappointment in Gage.

In the weeks following Bunker Hill, Burgoyne engaged in heavy correspondence with Charles Lee, a former subordinate of Burgoyne and now an officer in the Continental Army. It is unknown if Burgoyne was merely conveying personal opinions to an old comrade or if the British general was negotiating an end to the conflict. Either way, the communications ceased in December 1775, when Burgoyne was granted furlough to return to England and care for his ailing wife, Charlotte.

In April 1776, Burgoyne returned to North America to serve as second in command to Sir Guy Carleton in Canada. Throughout the summer, Carleton and Burgoyne repeatedly repelled American attempts to invade Canada. By October, however, Burgoyne contracted influenza and was sent home again.

While in England, Burgoyne penned Thoughts for Conducting the War from the Side of Canada, in which he ambitiously laid out his plan for the capture of the Hudson River Valley. In his plan, Burgoyne’s army at Montreal would march south, capture Fort Ticonderoga, and continue along the Hudson to Albany. The second force at New York, under the direction of General William Howe, would march north along the Hudson River and meet Burgoyne at Albany. A third, smaller force commanded by Barry St. Leger would act as a diversionary force and advance from the west along the Mohawk River Valley, picking up loyalist militia along the way. This plan was employed by the British during the Campaign of 1777.

Despite logistical adversity, Burgoyne prospered on the battlefield. On July 6, his army captured Fort Ticonderoga, dealing a major blow to American morale. The following day, Burgoyne achieved another victory over the Americans at Hubbardton. Days later, the Americans evacuated Fort Anne and Fort Edward as Burgoyne continued to move south.

By early August, however, Burgoyne’s good fortune ran out. Contrary to the predictions of the British War Office, loyalist militia did not come out in strength to support St. Leger. Mired in a twenty-one day siege of Fort Stanwix, an outnumbered St. Leger was forced to retreat into Canada. In New York, Howe decided against meeting Burgoyne at Albany in favor of moving into Pennsylvania to confront General George Washington’s army. Burgoyne did not receive information about Howe’s decision until it was too late. Hindered by American efforts to obstruct roads, Burgoyne’s army slowed to a crawl as it approached Saratoga, where 12,000 Americans under General Horatio Gates waited.

Retreat was never an option for Burgoyne as it would have enabled Gates to cut across New York and link with Washington’s army. Burgoyne was committed to breaking through the American lines at Saratoga. In an effort to flank the American forces there, Burgoyne sent a column of Hessians to raid Bennington on August 16, but this attack proved unsuccessful. Two direct attacks were made on Saratoga, Freeman’s Farm on September 19 and Bemis Heights on October 7. Although Burgoyne came close to achieving victory on the battlefield, both attempts failed. Outnumbered, surrounded, and unable to retreat, Burgoyne surrendered his army of approximately 5,000 men on October 17,1777. 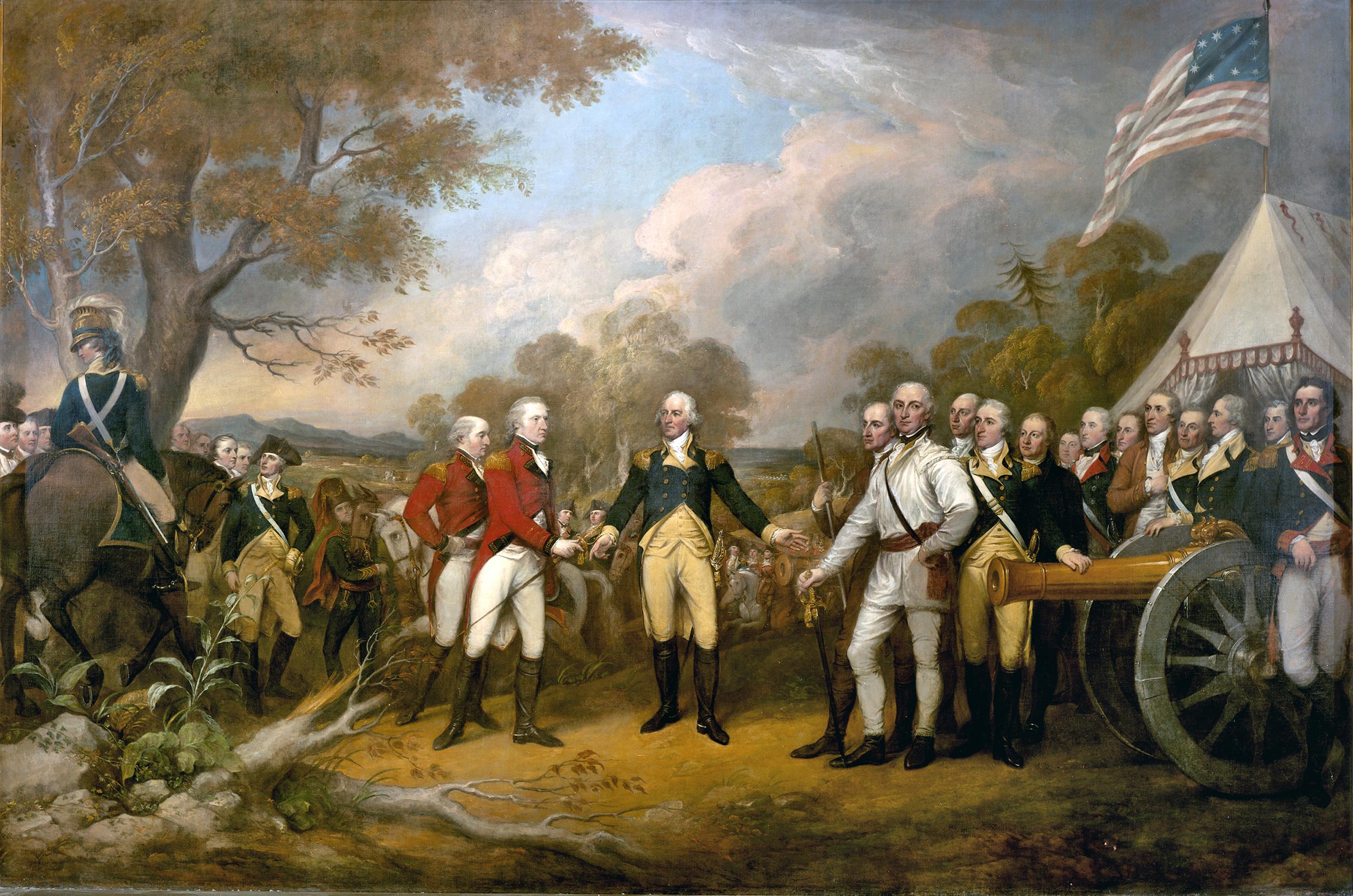 The British defeat at Saratoga shocked the world. Few believed the Americans could win a regular engagement against the British Army. Influenced by the American triumph, France entered into an alliance with the United States that would prove critical to American victory in the war. Burgoyne’s army was taken prisoner and spent the winter of 1777 in Boston. However, General Washington pressured Congress to release Burgoyne’s army and in February 1778, Burgoyne and his men were sent to England on the condition that they would not fight against the United States again. Once cleared of any wrongdoing by the British War Office, Burgoyne returned to the life of a gentleman. He became a celebrated dramatist with two of his more notable plays, The Lord of the Manor and The Heiress, receiving wide acclaim. Burgoyne died at the age of 70 on August 3, 1792.