During his lifetime, George Washington amassed a library consisting of over 900 books, plus dozens of pamphlets and other publications, for a total of more than 1,200 titles.1 Washington's library included books on agriculture, the military, history, politics, philosophy, and travel, as well as literature, plays, reference works, and books in foreign languages, including French, Dutch, and Latin. Although Washington had a reputation among his contemporaries as being unread, the care put into his library and its size counter this impression.

During Washington's Lifetime
Throughout his life, Washington's library grew in various ways, including through purchases that he made and via gifts of books by their authors, particularly after Washington became known worldwide in the 1780s and 1790s. Washington kept current with the catalogs of book dealers in Philadelphia and New York, and was particularly interested in collecting and promoting titles by American authors after the Revolutionary War. 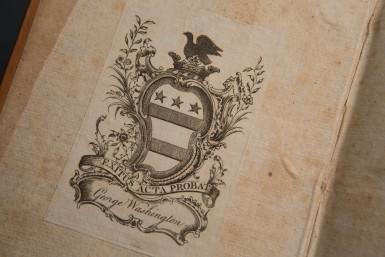 In 1771, Washington had a bookplate designed for him and ordered between 400 and 500 of them. At this point, Washington did not own that many books, suggesting that he intended to continue increasing the size of his library; an inventory from 1764 listed 325 titles, though not all were Washington’s books. Washington signed many books in his library in the upper right corner of the title page, but not all of his books have his signature or bookplate.

In 1783, just before his retirement as commander-in-chief of the Continental Army, Washington had his estate manager compile a list of all of the books at Mount Vernon. Despite Washington’s wide-ranging collection, this list did not include a Bible. In fact, he owned very few books about religion, and those that he did own probably were given to him as gifts by their authors.

Washington’s contemporaries did not perceive him as an avid reader. John Adams described Washington as "too illiterate, unlearned, unread for his station and reputation," and Thomas Jefferson concurred.2 However, it is clear that Washington was a practical reader. For example, he wrote to his subordinate officers during a lull in the French and Indian War that: "As we now have no opportunities to improve from example; let us read, for this desirable end. There is Blands and other Treatises which will give the wished-for information."3 Humphrey Bland's Treatise of Military Discipline, published in London in 1727 and purchased by Washington in 1756, remained in Washington's library until his death. While Washington owned works on military matters, politics and related subjects made up the majority of Washington’s collection, with books ranging from Plato and Cicero to contemporary political philosophers such as John Locke and Thomas Paine.

Washington also utilized pamphlets to keep up with current issues, including the transatlantic debate over slavery, as well as arguments over the ratification of the United States Constitution. Washington owned thirty-six volumes of pamphlets bound together, including selections of political tracts and a volume of six antislavery pamphlets. After the pamphlets were cut to equal sizes, the volumes were all bound in the same leather, with a red label and seven gold bands on each spine. The workmanship was not ornate, but it was high-quality.

Although Washington did not annotate his books as frequently as some of his contemporaries, surviving books from his library do feature annotations. The most extensive margin notes in Washington’s hand are in James Monroe's work, A View of the Conduct of the Executive, which criticized Washington's presidential foreign policy.

In 1834, George Corbin Washington sold the presidential papers and many military-focused books to the US government: they became part of the Library of Congress. In 1847, George Corbin Washington sold 359 of Washington’s books to Henry Stevens, a prominent rare book dealer and American agent for the British Museum. When Stevens proposed to sell the Washington collection to the British Museum, the Library of Congress did not make an effort to secure it. Popular, patriotic clamor helped stir the Boston Athenaeum to mount a collection drive to keep George Washington's books on American soil. After repeated efforts to garner the necessary funds, the drive raised only $3,250.5

Stevens ultimately sold the collection to the Athanaeum for the amount raised, though it was substantially less than the original asking price of $7,500. As a result, Stevens claimed to hold back five books, two of which he sold to James Lenox for $350 and the other three that he gave to the British Museum, the Bodleian Library in Oxford, and the Royal Library in Berlin. The actual fate of these books is uncertain, since in 1961 neither the Bodleian nor the Deutsche Staatsbibliothek had any record of a gift of a book from Washington’s library. The British Museum does still own a book from the library given by Stevens.

Today
The volumes from Washington’s original library remain scattered. The books purchased from Stevens continue to reside at the Boston Athenaeum, where they are kept in a replica of Washington's book-press in his study at Mount Vernon. Other volumes are in various public institutions, including the Library of Congress, several university libraries, and the Pierpont Morgan Library, while still other volumes are in private hands or in unknown locations. A major goal of the Fred W. Smith National Library for the Study of George Washington at Mount Vernon is to recreate Washington's library; the library currently has 103 volumes, representing 62 titles, from Washington's original library, as well as copies of many of the other books that Washington owned and books owned by other members of the Washington family, including Martha Washington.