The Declaration of Independence, July 4, 1776

"When in the Course of human events it becomes necessary for one people to dissolve the political bands which have connected them with another and to assume among the powers of the earth..." 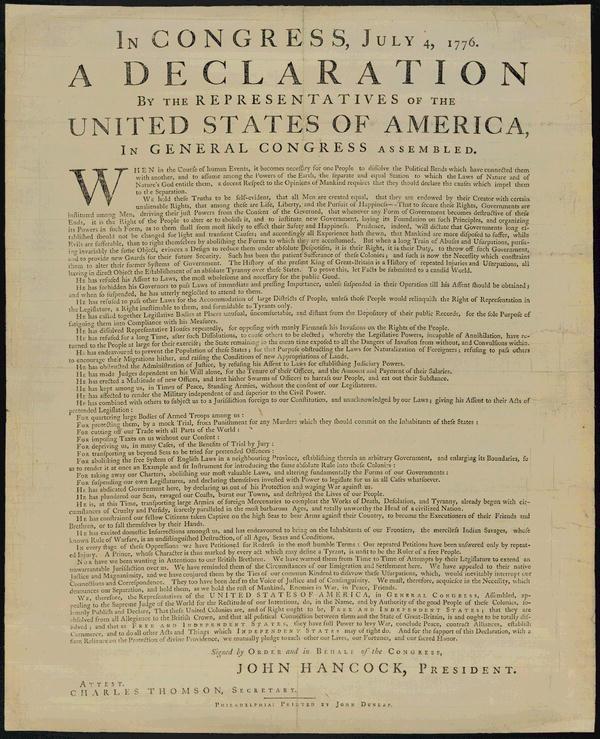 Hancock explained that Congress had struggled with American independence for some time, and even after making this momentous decision, many members were worried about its consequences. He concluded that Americans would have to rely on the "Being who controls both Causes and Events to bring about his own determination," a sentiment which Washington shared.1 For the commander-in-chief, who needed to lead his untrained army against Great Britain, the decision for independence came as welcome news, especially since his men would now fight not merely in defense of their colonies but for the birth of a new nation.

Next came Jefferson's stirring words explaining "...that all men were created equal and endowed by their Creator with the inalienable Rights of Life, Liberty, and the pursuit of Happiness..." Since King George III had trampled on these rights, as Jefferson argued in a long list of complaints against him, the people of the United States of America had the right to break the political bands that tied them to Great Britain and form a new government where the people would rule themselves. The words were so moving that citizens who had heard the declaration raced down Broadway toward a large statue of King George III. They toppled and decapitated it, later melting down the body for bullets that would be much needed in the coming battles to defend New York and the new nation that lay beyond it.