A nation of native North Americans, the Cherokee have a long connection to the present-day eastern and southeastern United States. Prior to European settlement of the Americas, Cherokees were the largest Native American tribe in North America. They became known as one of the so-called "Five Civilized Tribes," thanks to their relatively peaceful interactions with early European settlers and their willingness to adapt to Anglo-American customs.1 Despite their long history of alliances with the British, the Cherokee maintained peaceful relations with President George Washington after the American Revolution. However, the tribe also faced the difficulties of cultural assimilation.

The Cherokee had a long history of peaceful interactions with British settlers, beginning when the two groups became trading partners in the late seventeenth century. Their economic partnership eventually evolved into a military alliance, with the Cherokee aiding British forces in 1712 in battle against the Tuscarora. At the outbreak of the French and Indian War in 1754, Cherokees once again fought alongside the British, working largely to protect the southern Appalachian Mountains. However, the British-Cherokee alliance was not without its problems. In 1760, the Cherokee War broke out after underpaid and dissatisfied Cherokee warriors began to rob Virginia farms and raid settlements in the modern-day Carolinas. This dispute was brief, ending with a peace treaty in 1761. King George III issued a proclamation in 1763 prohibiting European settlement west of the Blue Ridge Mountains into Cherokee land. Although this law was widely ignored, the effort—along with the Cherokee's history of alliance with the British—likely contributed to the tribe's decision to side with British forces during the Revolutionary War. 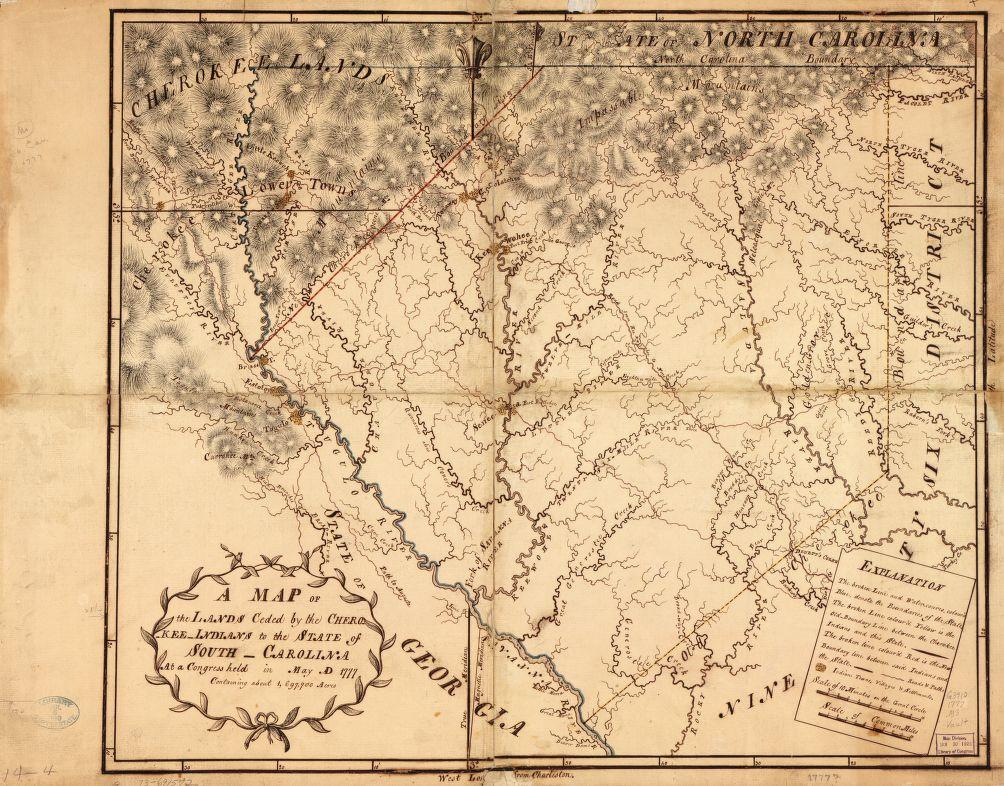 From the beginning of the war, Cherokee efforts met limited success. Early attacks by the tribe on Georgia, the Carolinas, and Virginia led to a counter-operation by a southern detachment of the Continental Army led by General Charles Lee. Known as the Cherokee Campaign of 1776, Lee's operation devastated tribal settlements. In September 1776, Patrick Henry's correspondence with Washington included references to "some hot Skirmishes" with the Cherokee and noted that Continental forces had defeated the tribe despite having "inferiour Numbers."2

The Cherokee Campaign left nearly fifty Cherokee towns destroyed and thousands of survivors without homes or access to food. In exchange for peace, the tribe relinquished vast amounts of land to the Americans, including some of its oldest settlements. The Cherokee had been conquered and were forced into their first major cession of land. Following their peace agreements with the Americans, the tribe was able to maintain a degree of cultural and political independence.

George Washington's treatment of the Cherokee nation during the Revolutionary War was one of a strict military enemy. In a letter to John Hancock on February 5, 1777, Washington referenced orders he had given to Captain Nathaniel Guest, who led a regiment through Virginia and the Carolinas. In the orders, Washington directed Guest to "bring a Company or two of Cherokee Indians" during his attacks on these areas to serve as scouts as well as hostages in order to “secure the good behaviour of their Nation."3

Washington's openly hostile approach to the Cherokee dissolved following the Revolutionary War. Near the beginning of his presidency, Washington asserted "to the commissioners for negotiating a treaty with the southern Indians . . . That the Government of the United States are determined that their Administration of Indian Affairs shall be directed entirely by the great principles of Justice and humanity."4

The policy resulted in the Treaty of Holston between the Cherokee nation and the United States government in 1791. The treaty served as a declaration of peace, outlining the specific boundaries of Cherokee land and giving the tribe the right to enforce those boundaries and punish trespassers. However, it also placed the Cherokee under the official protection of the United States, granting the government the right to control the tribe's trade and foreign relations. The Cherokee agreed to some level of cultural assimilation, particularly in regards to a move toward sedentary subsistence agriculture.

The conditions laid out in the Treaty of Holston illustrated President Washington's desire to maintain peaceful relations with the Cherokee while also promoting American interests. The Cherokee were appeased by official sovereign borders, while the United States gained access to tribal lands. The Cherokee transition to farming opened the tribe's vast hunting grounds for use by European settlers.

In August 1796, Washington again demonstrated his approach to Cherokee relations in his "Talk to the Cherokee Nation." He referred to the tribe as "my beloved Cherokees," showing a drastic change in attitude from the Revolutionary War.5 Washington encouraged the tribe to continue to pursue sedentary farming practices and described the measures to be provided by the American government for that purpose. These included experts to instruct the Cherokee people in practices such as spinning, weaving, and plowing and the provision of certain livestock, as well as the appointment of an Agent of the United States to maintain communication between the tribe and the government.

During the Washington presidency the Cherokee lost some of their independence through assimilation. Simultaneously, the group maintained peaceful relations with the United States. For the Cherokee, however, amiable relations did not continue after Washington's presidency. With President Andrew Jackson's support, the Indian Removal Act of 1830 led to the displacement of large segments of the original Five Civilized Tribes from the southeastern United States. In 1838, the Cherokee were forced to relinquish their ancestral lands east of the Mississippi River and relocate to present-day Oklahoma in an event known today as the Trail of Tears. On this journey, more than 4,000 of approximately 15,000 coerced migrants died.

Notes:
1. The other four "Civilized Tribes" were the Choctaw, Chickasaw, Creek, and Seminole nations.

4. "Memorandum, To the Commissioners to the Southern Indians, 29 August 1789," The Papers of George Washington, Digital Edition.