Washington and the Battle of Brandywine

The Brandywine Campaign of 1777: An Interview with Michael Harris

Mount Vernon had the opportunity to speak with Michael Harris, author of the book, Brandywine: A Military History of the Battle that Lost Philadelphia but Saved America, September 11, 1777. Harris shares his views about the Brandywine Campaign and its importance to the American Revolution. 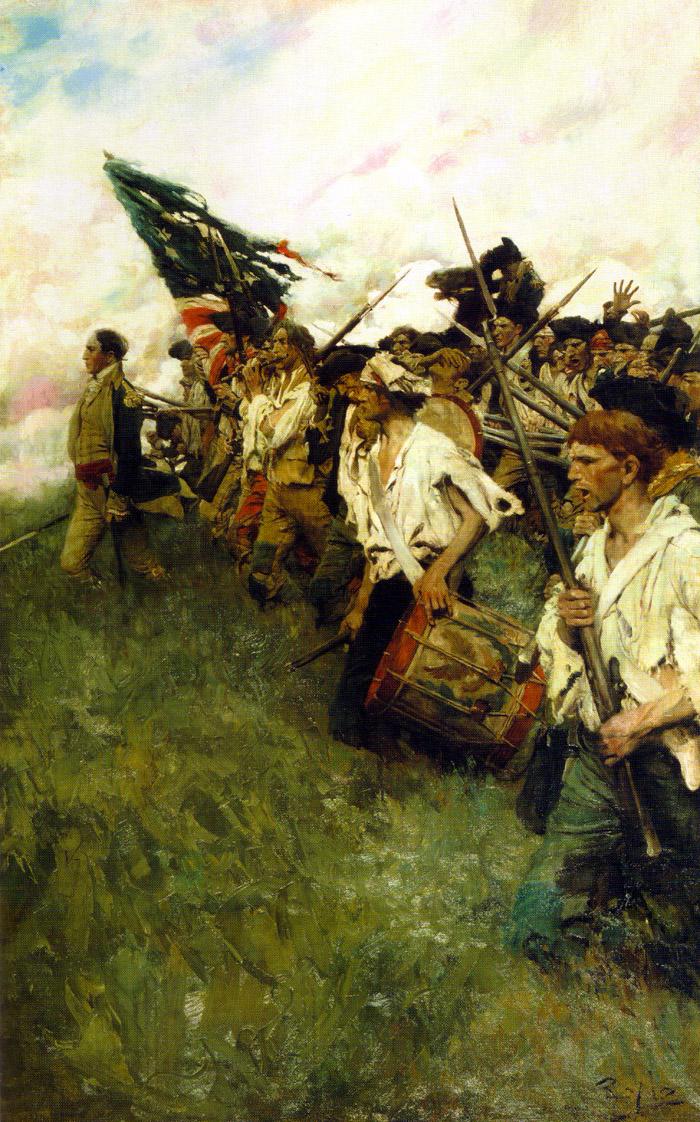 The Battle of Brandywine, fought just outside of Philadelphia on September 11, 1777, resulted in an overarching British victory and the conquest of the rebel seat of government. However, the victory provided few strategic gains for the British and the valiant effort of the Continental Army proved that the rebels could take on the full brunt of the British Army and survive, bolstering their confidence to fight another day.

In August 1777 General William Howe and his army of British regulars and Hessian mercenaries departed northern New Jersey, traveling towards Philadelphia by sea. Howe’s choice to travel by sea confused his men and confounded his adversary, General George Washington, who was unsure of the British destination. Although they endured a miserable three-week journey down the Atlantic seaboard, Howe’s force of 16,000 British regulars landed at Head of Elk, Maryland on August 25, 1777.

As late as November 1776, the British campaign plan had focused on capturing the Hudson River Valley, not Philadelphia. Howe originally plotted to march an army north to Albany, New York, to meet a British army led by General John Burgoyne marching south from Canada. This ambitious plan was foiled by a lack of available troops and supplies, forcing Howe to alter his strategy and attack south. While Howe did enjoy initial success in his Philadelphia campaign, Burgoyne’s army suffered a pivotal defeat at the Battle of Saratoga. As the British force began their march out of the Chesapeake and through northern Delaware, Washington could finally be certain that the British sought to capture the capital city of Philadelphia. On the advice of his council of war, Washington chose not to meet the British force head-on after their landing. Instead, he began scouting Howe’s movements and organizing his troops hoping that Howe “will put the contest on the event of a single battle: if they are overthrown, they are utterly undone––the war is at an end.”1 The stage was set for the potentially decisive battle of the American Revolutionary War.

The Brandywine Creek and its surrounding countryside, consisting of thick forests, rolling hills, and treacherous ravines, made a formidable obstacle for the British advance on Philadelphia. However, the rebel defense was greatly hampered by the large number of loyalists and Quakers in the area, leaving the rebels with few local allies to provide scouting and reconnaissance. Howe utilized the help of Joseph Galloway a staunch loyalist and lifelong resident of Chester County, Pennsylvania, to provide crucial intelligence for the British. Meanwhile, Washington had deployed his most capable scouts, the riflemen under the command of Daniel Morgan, to reinforce the Saratoga Campaign and was left with an ineffective cavalry corps that proved almost useless in its advance scouting. This disparity in effective intelligence between the two sides would prove to be the decisive factor on the battlefield.

Using the best intelligence at his disposal, Washington organized his army’s defense around Chadds Ford, the primary crossing of the Brandywine on the route to Philadelphia. Establishing his defense on the creek’s eastern bank, Washington first deployed his two brigades of Pennsylvania militia to guard his left flank and the minor crossing at Pyle’s Ford to the immediate south of Chadds. Utilizing the rugged terrain to his advantage, Washington firmly anchored his left flank. Anticipating the heart of the British attack to focus on his center and the crossing at Chadds Ford, Washington deployed his most experienced units at the center: one division under the command of Major General Nathanael Greene, with the bulk of the army’s artillery; and another under the command of Brigadier General Anthony Wayne, with the army’s reserves. Washington’s center was firmly secured.

Unlike his left, which was anchored by rugged terrain, Washington’s right remained unsecured, gently fading into the rolling hills of the Pennsylvania countryside with no natural obstacle to anchor it. Washington placed Major General John Sullivan in charge of his entire right flank, with three divisions responsible for defending all the territory north of Chadds Ford. Finally, Washington placed Brigadier General William Maxwell and his light infantry on the western bank of Chadds Ford to meet and harass the anticipated British attack. In total, Washington’s Army was roughly equal to Howe’s, comprising approximately 16,000 men.

Taking advantage of his excellent intelligence and reconnaissance, Howe recognized the weakness of Washington’s right flank and devised a battle plan to take full advantage of the American position. Around 5:00 am on the morning of September 11, 1777, Howe and Lieutenant General Charles Cornwallis departed the British camp near Kennett Square with approximately 8,200 regulars and Hessian mercenaries. Using Galloway’s expertise of the area, Howe planned to march his army some twelve miles north from Kennett Square along the Great Valley Road and cross the Brandywine above its forks, first at Trimble’s then at Jeffries’ fords. Howe was fully aware that the rebels had left these fords undefended, and if he could safely march his army through a number of dangerous, narrow defiles, he would be able to surprise the rebel right and turn the army’s flank. While Howe was maneuvering to outflank the rebels, General Wilhelm von Knyphausen and the remaining 6,800 British and Hessian troops would march directly on Chadds Ford and capture the heights on the western side of the creek, then wait for the arrival of Howe’s force and launch a coordinated attack to envelop Washington’s army.

At approximately 6:00 am, Knyphausen’s force began its march towards Chadds Ford, skirmishing with Maxwell’s advanced guard of light infantry. After a surprisingly stiff rebel resistance, Knyphausen took the western heights around 10:30 am, fired a cannon shot to signal his arrival to Howe, and ordered a number of marksmen and artillery to keep the rebels occupied with superficial fire. Washington suspected a British plot was afoot. His fears were confirmed by a number of initial intelligence reports, first around 11:00 am and more substantially at 12:00 pm when a rider from Lieutenant Colonel James Ross’s scouting regiment reported that they had encountered a large British force along the Great Valley Road. Acting on this intelligence, Washington ordered a reorganization of the right flank, sending two divisions under Stephens and Stirling to occupy Birmingham Hill to the east of the creek.

Washington devised a plan to take advantage of the divided British force. After receipt of Ross’s message, Washington deployed General Sullivan to attack Knyphausen’s left while the main rebel force attacked his right at Chadds Ford. He hoped to deliver a devastating pincer movement to encompass Knyphausen’s force before turning his attention to the impending threat against his right. Washington’s plan had the potential to annihilate the split British force, but if Howe was simply executing a feinting maneuver and really planned to reinforce Knyphausen at Chadds Ford, the rebel army could be drawn into a devastating trap. As his army began executing the pincer movement against Knypphausen, Washington received an ultimately false intelligence report from Major Joseph Spear claiming that the Great Valley Road was free of redcoats, contradicting the earlier intelligence. Fearing the deadly trap, Washington halted the rebel assault across the creek and redeployed the troops from Birmingham Hill back to their original positions.

In the meantime, Howe’s force made remarkable time up the Great Valley Road, crossing both fords by 2:30 pm. Buoyed by the contradictory American intelligence reports, the British faced a disorganized rebel flank when fighting broke out around 4:00 pm as Howe ordered an assault against Birmingham Hill. Having confirmed the validity of the initial intelligence, Washington frantically ordered Sullivan to reassume command of the entire right flank and occupy the high ground at Birmingham Hill. The rebel forces under Wayne and Maxwell would defend against Knyphausen’s anticipated attack across Chadds Ford while General Greene would wait in reserve, ready to reinforce either flank as needed. Savage fighting broke out on the right flank, as waves of British soldiers rushed the American forces. The rebels fought valiantly, and Birmingham Hill changed hands upwards of five times as the rebel lines continued to break and rally.

Recognizing the peril he faced on the right flank, Washington rushed to personally assume command. Additionally, he ordered Greene’s reserves to reinforce the right. Greene’s men rushed to the scene, covering some four miles in under 45 minutes and stabilizing the rebel lines. Washington’s presence restored order and revitalized rebel spirits, but could not repel the overwhelming British attack. In perhaps the most important moment on the battlefield, Washington began organizing a coordinated withdrawal, preserving the Continental Army to fight another day. As Howe’s force assaulted the right, Knyphausen crossed Chadds Ford but met stiff resistance. The rebel lines quickly collapsed, but rallied and halted the British advance at Dilworthtown, preventing the closing of the pincer movement and the envelopment of Washington and the main army.

By the close of the battle, the British suffered some 583 killed and wounded, while the rebels counted about 200 dead, 500-600 wounded, and 400 captured. Brandywine resulted in a clear British victory, but that victory provided little in concrete gains. After the battle, Washington was “happy to find the troops in good spirits.”2 His army had not only survived but demonstrated the ability to withstand the full power of the British Army.