We have come to the home of George Washington today in memory of that other day, exactly one hundred and fifty years ago, when the owner of Mount Vernon received a message from the first Congress of the United States.

Here in his beloved Mount Vernon he listened to the formal message from the Congress announcing his election as the first President of the United States of America. 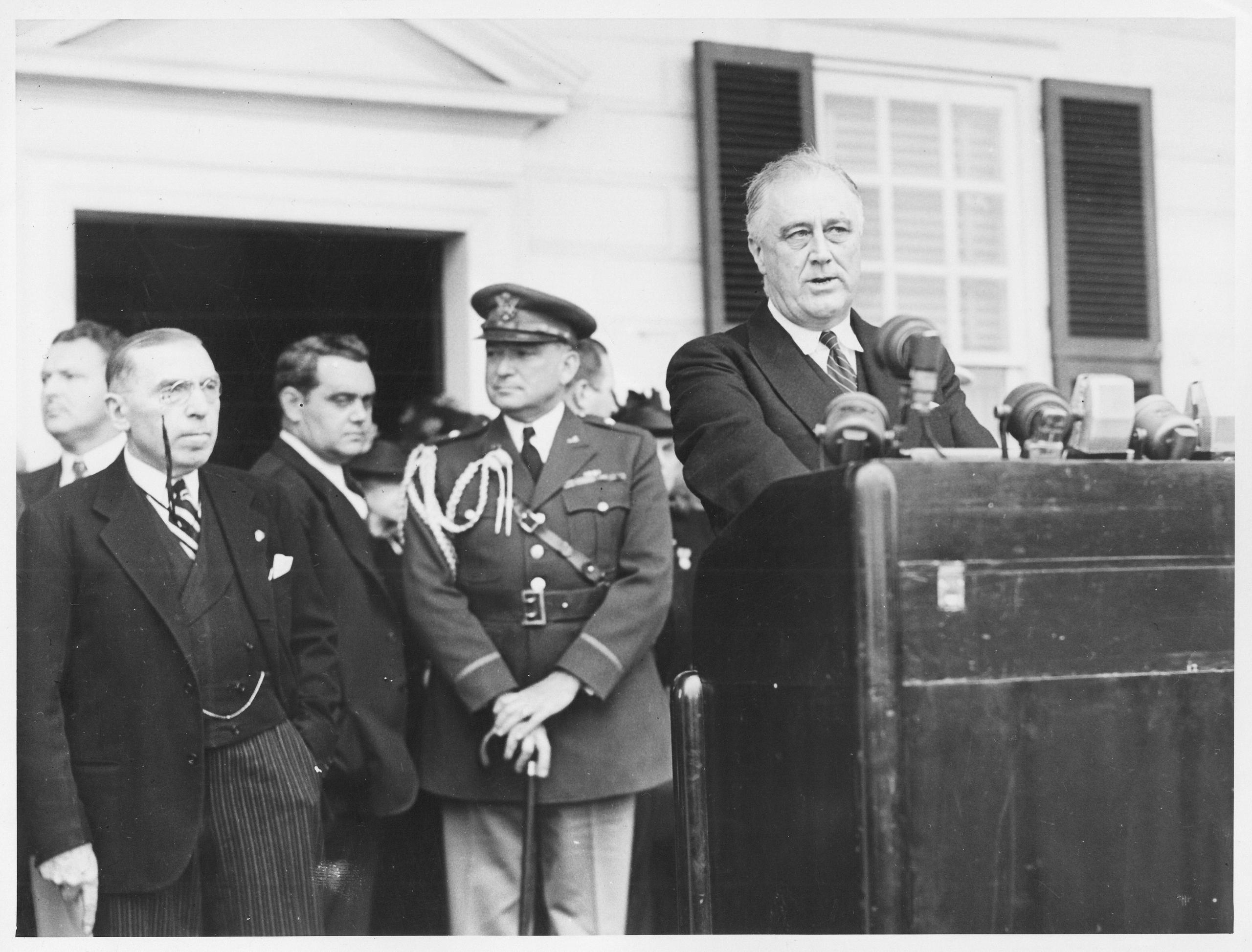 Charles Thomson, his guest, had ridden hither from New York to bring it—Charles Thomson, native of County Derry in Ireland, a Pennsylvania Irishman, with a passionate zeal for liberty, who, through fifteen eventful years, had served as the Secretary of the Continental Congress.

We who are here today can readily visualize that scene from this porch—the sprouting lawn, the budding trees and the dogwoods, and the majestic Potomac running by at the foot of the hill. We can visualize the thoughts, too, which flowed through General Washington's mind. Saying farewell to his army in 1783, the independence of the Colonies assured, he, already the Father of his Country, had returned to his beloved home with the expectation that his task was done and that he would live a happy and useful life on his broad acres during the remainder of his days.

But trying times still lay ahead for the struggling nation, and those years after 1783 proved the most critical peace years in all our history.

Called from his home, he had presided with skill and patience over the Constitutional Convention of 1787. And anxiety and doubt had attended him for many months thereafter while he waited for belated news that the Constitution itself had been ratified by the States.

I take it that when the permanent framework of the Union had been assured in the summer of 1788, the elections ordered, and the First Congress summoned, General Washington must have known that the task of the Presidency would, without question, fall on him.

It meant that once more he would leave Mount Vernon behind him, with no certainty of his return, and that on his shoulders, in the far off North, would lie the burden of initiating the civil leadership of a new, untried Republic.

He knew that his would be the task of ending uncertainty, of ending jealousy between the several States and of creating, with the help of the Congress, a functioning national government fit to take its place among the organized nations of the world.

Two days later he and his family were to set forth on that long and difficult journey by highway and ferry and barge, which was to culminate in his Inauguration as President on the balcony of Federal Hall in New York City on April 30, 1789.

Doubtless on this very porch he sat with Charles Thomson hearing at first-hand of the long efforts of the first Senate and the first House of Representatives to obtain a quorum, learning of the unanimity by which the votes of the Electors were cast for him, listening to the precedents that were being set in the conduct of the first Legislature under the Constitution, and thinking doubtless that his own every move, from that day on for many years, would be chronicled for future generations and thereby set the tempo and the customs of the Presidency of the United States.

But I am to be forgiven if I, the thirty-first individual who has borne the title of President, dwell for a moment on the feelings within the heart of him who was about to be the first President.

Washington was essentially a man close to mother earth. His early training on a plantation, his profession of surveyor, his studies in agriculture and the development of farm lands were never replaced by his outstanding military service under Braddock or as Commander-in-Chief for the eight years of the Revolution.

We know that when Mount ,Vernon came to him by inheritance, here his heart was planted for all time. Here he could talk with his neighbors about the improvement of navigation on the river, about grist mills on the creeks, about the improving of highways, about the dream of a canal to the western country, about saw mills and rotation of crops, about the top soil, which even then had begun to run off to the sea, about the planting of trees, new varieties of food and fodder crops, new breeds of horses and cattle and sheep.

Here, too, he had his books and was in touch with the authors and artists of the new and old worlds.

Here at the junction point of the North and the South, at the foot of one of the main arteries that led to the exciting new lands beyond the mountains, the travelers and the news stopped at his door.

That Washington would have refused public service if the call had been a normal one has always been my belief. But the summons to the Presidency had come to him in a time of real crisis and deep emergency. The dangers that beset the young nation were as real as though the very independence that Washington had won for it had been threatened once more by foreign foes. Clear it must have been that the permanence of the Republic was at stake and that if the new government, under the. Constitution, should fail in its early days, the several states falling out among themselves would become so many small and weak nations subject to attack and conquest from overseas.

So, my friends, it came about that once more he put from him the life he loved so well, and took upon himself the Presidency.

That cannot have been a wholly happy day for General and Mrs. George Washington on the fourteenth of April 1789—it must have been a day of torn emotions, a day of many regrets.

But the decision had been made. We, their successors, are thankful for that decision and proud of it. And I think that it would have made General and Mrs. Washington happy if they had known then that one hundred and fifty years later tens of millions of Americans would appreciate and understand how they felt that day in their Mount Vernon home.