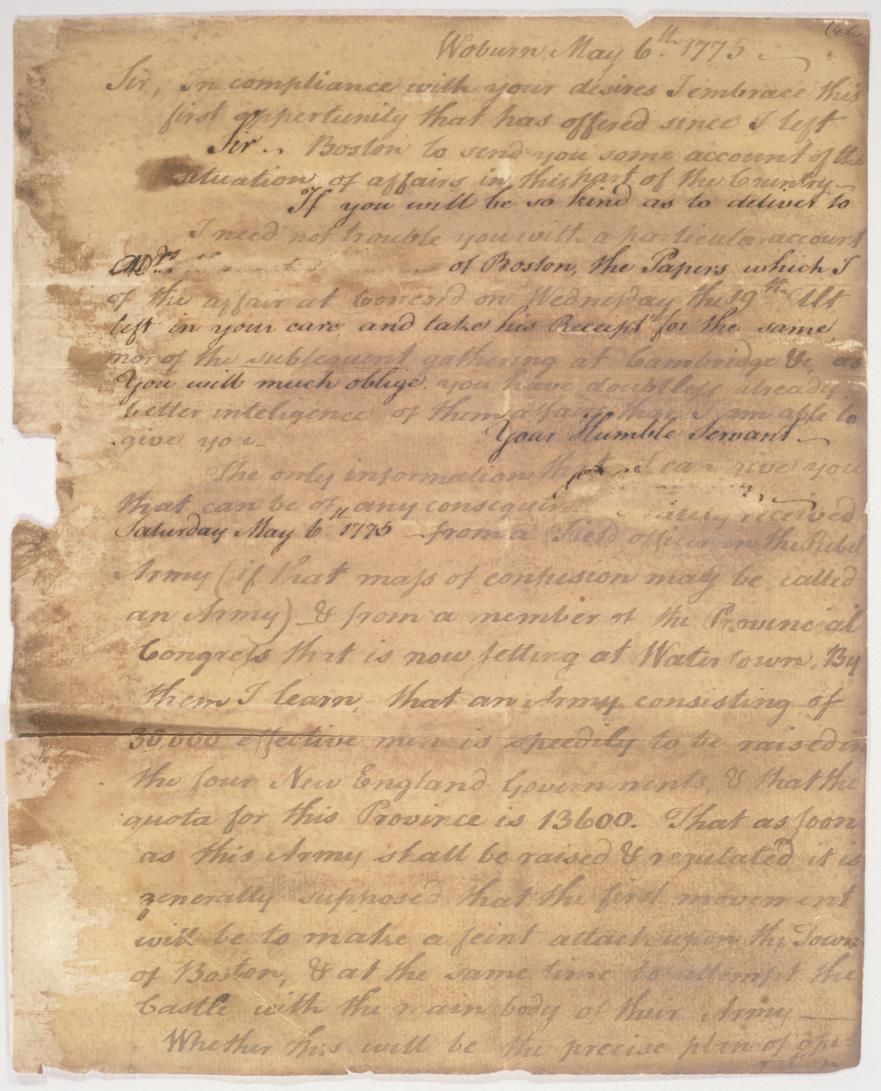 Sir / If you will be so kind as to deliver to / Mr. of Boston, the Papers which I / left in your care, and take his Receipt for the same, / You will much oblige / Your Humble Servant / (erased) / Saturday May 6th 1775

Woburn May 6th 1775 / Sir, In compliance with your desires I embrace this / first opportunity that has offered since I left / Boston to send you some account of the / Situation of affairs in this part of the Country- / I need not trouble you with a particular account / of the affair at Concord on Wednesday the 19th [ ] / nor of the subsequent gathering at Cambridge [ ], as / you have doubtless already / better intelligence of them affairs than I am able to / give you.

The only information that I can give you / that can be of any consequence [page loss] lately received / from a Field officer in the Rebel / Army (if that mass of confusion may be called / an Army) & from a member of the Provincial / Congress that is now setting at Watertown. By / them I learn that an Army consisting of / 30,000 effective men is speedily to be raised in / the four New England Governments, & that the / quota for this Province is 13600. That as soon / as this Army shall be raised & regulated, it is / generally supposed that the first movement / will be to make a feint attack upon the Town / of Boston & at the same time to attempt the / Castle with the main body of the Army- / Whether this will be the precise plan of operation

operation or not I cannot determine, but really / believe that the congress & their officers in Gene- / ral are determined to, & really imagine that they / shall be masters of both the Castle & the Town / of Boston in a very short time- / I am credibly informed that the Congress / mean now to prosecute their plan of Independence / at all adventures & in order to this that appli- / cation will speedily be made to someone of / the European Powers for assistance against Great / Britain- And this I am the moreready to / believe as I have it from a member of the congress, / one who is intimately acquainted with / the secrets of the party, & a man whom I can not / suspect of any design either to amuse or deceive / me. [page loss] / But this their plan is by no means [generally-?] / comonly known or suspecte by the People in gene / -ral, but they are still fed up with the old story / that "their invaluable rights & priviledges are / "invaded". & are taught to believe that the military / preparations which are now making are in defence / of them & to obtain redress- / As to the quantity of ordnances other military / stores that have been provided by the Congress & / I have not been able to obtain any satisfactory / accounts. But believe that the quantity is by no means equal.

[page loss] plan of operation they have formed [page loss] / [page loss] [D]unbar from Canada, & Ens. Hamilton of / [page loss] Reg [?] with their servants are Prisoners in this / Town, But I have not permitted to see them tho[page loss] I / have made frequent applications for that purpose [page loss] / As to my own situation, it has been very disagreeable / since I left Boston, as upon my refusing to bear Arms a- / gainst the king I was more than ever suspected by the / People in this part of the Country [page loss] And it has been / with difficulty [page loss] few friends that I have here / have more than once prevented my bein asassinated. / I am extremely unhappy that my confinement to / this Town (by this deluded people) should put it out [page loss] / power to do any thing for the good of the service But [page loss] / soon to have an opportunity of giving convincing [page loss] / of my Loyalty to the King, & gratitude to all my benefac- / tors [page loss] in the mean time you will give me leave to as- / sure you in the most solemn manner possible, that neither / the threats nor promises of this wicked & Rebellious faction / shall ever induce me to do any thing contrary to my / professed loyalty to his Majesty [page loss] But that on the contrary / I do with the greatest pleasure & alacrity dedicate my / Life & fortune to the service of my rightful sovereign / King George the third - / I am Sir with the greatest respect / Your much obliged and / Most obedient Servant / [name cut out] / P.S. [name cut out] comes on purpose / to bring this & the Pistol you was kind / enough to lend me [page loss] I beg you would / be so good as to procure him a pass to / return