Frontiers may be geographical- an area thought to be on the edge of a settlement. They may be ideas- signifying the limits of knowledge or achievement in a particular activity or subject. These frontiers change over time; a frontier for one generation or group of people may be commonplace for succeeding generations. Explore the work of individuals at Mount Vernon who have thought of new ways of organizing politically, religiously, and socially and the impact of these new ideas.

The Journal of Major George Washington

The Journal of Major George Washington is of considerable historical significance. The journal provides a first-hand glimpse of frontier diplomacy, the beginnings of the French and Indian War, as well as early indications of Washington's well-documented physical vigor and leadership. 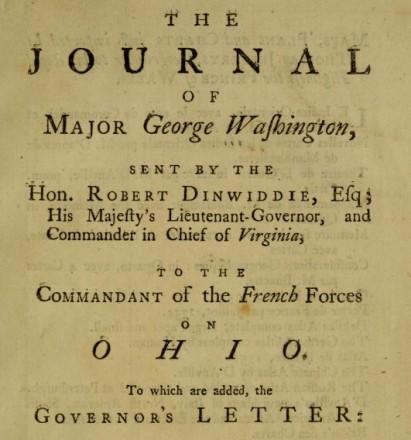 For two decades, William Lee accompanied Washington nearly everywhere. William Lee served with Washington throughout the Revolutionary War. He was responsible for organizing the general’s personal affairs, including his voluminous papers, and holding his spyglass.  Lee spent more than seven years in close proximity to Washington during the intensity of the war. But he was enslaved by Washington. Lee was forced to help Washington fight for a new frontier of self-government, without knowing whether he would receive the same freedoms.

To the Hebrew Congregation in Newport, Rhode Island

Religious Liberty is a key part of the founding era/enlightenment thinking that informed the rule of law government.  Self-governance would rely on a populace that was educated in political thought and morality. Washington is not unique in this arena, but his specific choice to make public declarations to numerous religious groups, from the office of President, before the adoption of the Bill of Rights, gave the public assurance that many religious communities were valued.  As President, he reached out to religious groups saying that their beliefs would not connect their relationship to citizenship. Religious Freedom was a new frontier within self-government in the 18th century. 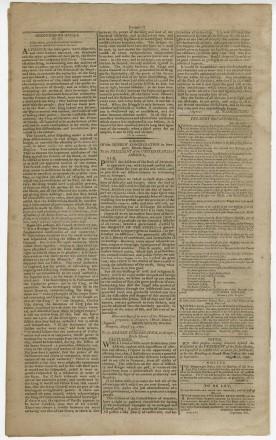 When George Washington was elected president, fifteen-year-old Ona Judge traveled with seven other enslaved people to the executive residence, first in New York and then in Philadelphia. She was among the enslaved people whom Washington secretly rotated out of the latter city in order to evade the 1780 Pennsylvania emancipation law. On May 21, 1796, as the Washingtons prepared to return to Mount Vernon for the summer, Ona Judge fled. As she recalled in 1845, “Whilst they were packing up to go to Virginia, I was packing to go, I didn’t know where; for I knew that if I went back to Virginia, I should never get my liberty. I had friends among the colored people of Philadelphia, had my things carried there beforehand, and left Washington’s house while they were eating dinner." Judge made the deliberate decision to find her own frontier of freedom that was denied to her. 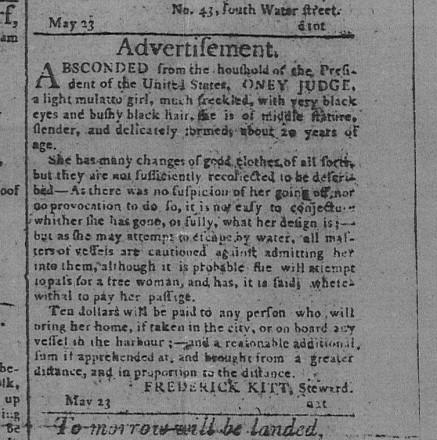 Louisa Bird Cunningham wrote to her daughter, Ann Pamela Cunningham, that if the men of the United States would not save the home of George Washington from falling into ruin, perhaps it should be the responsibility of the women. These words galvanized her daughter into action. Initially writing under the nom de plume, "A Southern Matron," Ann Pamela Cunningham challenged first the women of the South, and later the women of the entire country to save the home of George Washington. Her actions created a new frontier of historic home preservation that still exists today. 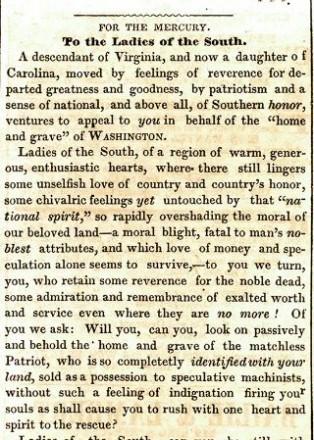